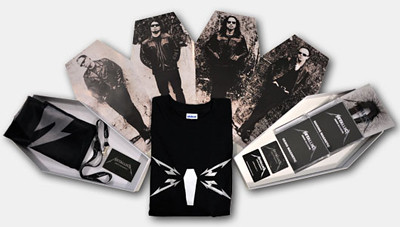 First heard of Metallica: I know Metallica when I was younger but never paid attention. When I started as a 15 year old kid as assistent sales in a computer store it became clear what I missed out on. I liked the standard metal back then and the older people there introduced Metallica to me. The main person there actually was one of the founders of Metalrage.com (TheWizz). Master of Puppets and the Black Album were given to me one week later. The first time I saw them live I was blown away completely.
Thoughts on St. Anger: Never really liked the album except for 'Frantic' but that was mainly due to the nice video. For the rest I think it is clear nobody likes the album since they hardly play songs from that album.
Was anxious to hear Death Magnetic on a scale from 1 to 10: 4
Thinks of Death Magnetic:
When the album leaked last week like all other metal fans I instantly downloaded the album and played it loud in my office. The band finally brought back riffing into their music and the first impression was positive. Ever since the record is played in my car almost on a daily bases and most songs still impress me a lot. My favorites include 'The End Of The Line', 'Cyanide', 'All Nightmare Long' and 'My Apocalypse'. The only real minor that I can think of is that some songs are a little bit too long and the get boring after a couple of spins. But overall the album is still entertaining and technically a good Metallica record. Death Magnetic is not the best Metallica record out there but it sure is opening a new era for Metallica. For me it is great to see Metallica get back in shape ever since I got to know them. The machine is back with a good album packed with 10 good songs which will be released in some great different editions.
Rating: 79/100
Continue Reading
» Buzzin Hornet on Death Magnetic
» Page 2: Neurotic on Death Magnetic
» Page 3: Gilles on Death Magnetic
» Page 4: Angel on Death Magnetic
» Page 5: Buzzin Hornet on Death Magnetic
» Page 6: Lex on Death Magnetic
» Page 7: Carn on Death Magnetic