Carn on Death Magnetic
Name Reviewer: Carn
Thinks Metallica is: metal.
Favourite Metallica album: Master Of Puppets
Favourite Metallica song: The entire Master of Puppets album, minus 'The Thing That Should Not Be', they named that one right.
First heard of Metallica: Probably my first year in high school. Having a few 'metal friends' during that period resulted into the broadening of horizons a little (..at that age I considered The Offspring to be the heaviest thing in the world..). That quickly changed when I got introduced to bands like Sepultura, Pantera, Machine Head and of course: Metallica. The Black Album was the first Metallica CD I bought, and I bought my way through their discography when my small amount of money allowed me to. Metallica has never been my favorite metal band, but I do agree that they might be the most influental metal band -ever-. Hell, I even played drums in a Metallica coverband...
Thoughts on St. Anger: Poopetypoop, altough I did buy it. A botched experiment in my opinion.
Was anxious to hear Death Magnetic: 8 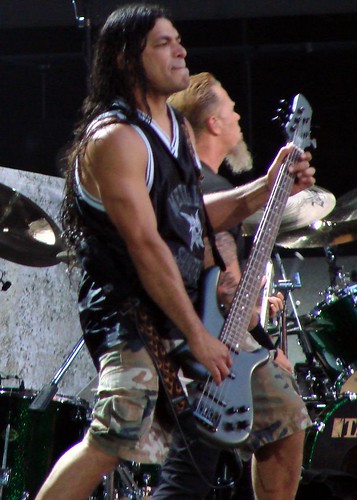 Thinks of Death Magnetic:
There is a reason why Ride The Lightning and Master of Puppets are such epic albums. The reason is Cliff Burton. To quote James Hetfield: "We never would have written guitar harmonies or instrumentals or songs with very intricate melodies and orchestrations without Cliff". Burton died, and ...And Justice For Alll has always sounded like a desperate attempt of trying to maintain their level of musicianship but ending up into way too many riffs and weird timed breaks. The most melodic song on that record 'To Live Is To Die' actually consists of Burton's left over riffs, and the rest of the album is Hetfield and Ulrich over-doing everything to make up for the lack of Burton.

Metallica, who basically reduced to a hard-rock outfit on The Black Album (thanks, Bob Rock?), tried to win back the old school fans with the so called "uncompromising" St. Anger in the new milennium; and we all know how that ended up.. (again, thanks, Bob Rock?).

Death Magnetic saw the entrance of famed producer Rick Rubin, who ended up letting the band do their thing and just making remarks like "I dont like this, change that a little". To me, Death Magnetic sounds like Metallica having an excellent time writing and recording a metal album. It still has an abundancy of riffs and transitions that are the result of the main writing duo not being able to say 'this is enough' and polishing the things that they have. I always wondered why they never worked with Fleming Rasmussen again. If you had been putting your money on a new Master of Puppets you have put your money on the wrong horse; this horse is older, not as tight and creative as it used to be. Tracks like 'All Nightmare Long', the instrumental 'Suicide & Redemption' and openingtrack 'This Was Just Your Life' are some of the best things this band has done since their Black Album effort, maybe even since ...And Justice For All' if you are a metal purist. 'My Apocalypse' is the fastest song they have written in almost 20 years time. Some of the tracks do have their 'filler' moments and could have used some trimming, but they never become a torment like on St. Anger. It does boggle my mind why the productionvalues on this album are only a slight improvement compared to their much discussed previous album, but it sure is an improvement.

In the end, Death Magnetic is one of the better Metallica albums. The band will never reach the level of songwriting they had in the 80s, but if they can write a few more Death Magnetics I`ll be a happy Metallica fan.