Thinks Metallica is: Great, despite some lesser albums.

Favourite ‘tallica song: 'Dyers Eve' and 'Wherever I May Roam' (among many, many others)

First heard of Metallica: When I was twelve or thirteen (so around 1992/93) and I went to an away game with my football coaches by car and they played 'One' and 'Enter Sandman' on their stereo.

Thoughts on St. Anger: Not impressed. Their weakest effort to date. I think that the 'Unnamed Feeling' and 'All Within My Hands' are nice tunes, but I cannot really listen to the rest. Some nice ideas, but the songs are way too boring because of length and the absence of solos and of course the horrible, horrible production.

Was anxious to hear Death Magnetic on a scale of 1 to 10: 10. I was very curious and I tried to gather as much news about as I could. 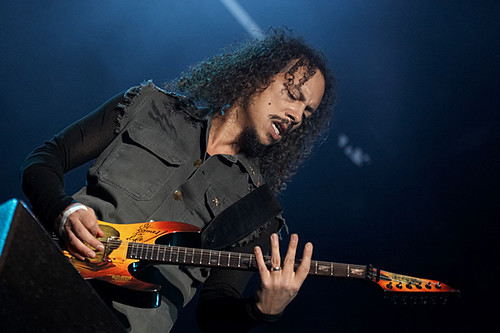 Thinks of Death Magnetic:
I have listened to it like seven times right now and I still don't get bored by it. Something that says enough these days. If I have to give a short description of the style I would say a mixture between ...And Justice For All, The Black Album and all larded with some influences of previous albums. Big difference though is, that compared to ...And Justice For All, this album actually has  bass guitar!

This album finally rocks again and has a nice production. I especially like: 'The Day That Never Comes', 'Cyanide', 'Judas Kiss' and 'All Nightmare Long'. A very big plus this time around is that they made the compositions interesting, despite the length of the songs. Maybe the songs could be a bit shorter sometimes. A 'problem' that occurs for example with 'The End Of The Line'. A song that kicks off with vocal lines, which are very reminiscent to 'Creeping Death', but after that it gets to a chorus which doesn't feel quite right and it gets a bit boring. I also thinks that 'The Unforgiven III' is a weak song. I don't like 'Unforgiven I', I think 'Unforgiven II' sucks major balls and this is in that light a worthy successor. James' voice again balances on the in key / out of key line on this songs. Please man stop trying to sing that high and focus yourself on your strengths! I'm also glad that they re-introduced the standard instrumental track on the album. It's not memorable perhaps, but just for the throwback feel it's great!

In short, nice album, definitely destroys a lot of their latter work (though I still like the first part of the Load album, regardless how much criticism that album got them) and got Metallica back in the ring. Definitely an album that will score high in my end lists!