Los Sin Nombre - Blind Leading Blind
With a name like Los Sin Nombre you could only expect that this band would hail from Sweden. Okay I might exaggerate a bit but after the first couple of tones I must say the Swedish influences are numerous. Especially Soilwork, In Flames and The Haunted are some of the names that cross my mind when I’m listening to this debut album called Blind Leading Blind.
Last year wasn’t filled with a great number of good debut albums. Luckily I can add Blind Leading Blind to this small list. It’s not that the album is really renewing or refreshing within the genre, on the contrary, everything is probably done before. Well then, what did Los Sin Nombre do to make this album so special. Well it’s quite simple. The guys are playing with everything they’ve got . Every songs sounds like it could be there last. Add to this a simple production that gives the album an edgy and raw feeling and you’ll have a final product that sounds killer, although it isn’t really renewing in any way.
So it is quite simple. If you like some good old fashioned Swedish riffing combined with some great melody lines and tight drumming you should check this album out and keep Los Sin Nombre in the back of your mind because they could be an interesting band for the next couple of years. 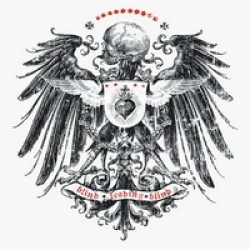