Starkill - Fires of Life
Listening to Chicago, Illinois based band Starkill can be seen as a game of musical charades; their sound easily likened to any number of their musical peers. The band however unashamedly wears these influences on their sleeves, even going so far as acknowledging and name checking such bands as Children of Bodom, Dimmu Borgir and Nightwish in their press release.
Fires of Life contains a somewhat odd mix of contrasting styles that strangely work quite well together. The base of their sound revolves around a black and melodic death metal core, although there is a heavy symphonic undertone to the album and plenty of riffs that feel as though they would not sound out of place in the power metal community also.
‘Whispers of Heresy’ is a track that instantly draws you in and a perfect opening song for the album. The intro begins with a dark orchestral piece that gives way to a symphonic black metal inspired section that demonstrates the influence that Dimmu Borgir clearly has on the band. Starkill are definitely no one trick pony however, as the track seamlessly transitions from dark black metal to melodic death metal styles and power metal inspired leads. The middle section also contains an ambient, piano driven piece that certainly shows the influence of Nightwish on the band.
The first single and title track ‘Fires of Life’ sees the band showcasing their melodic chops without sacrificing aggression, the singer and lead guitarist Parker Jameson’s decision to resist the temptation to sing cleanly certainly aids this. ‘Sword, Spear, Blood Fire’ and ‘Below the Darkest Depths’ follow similar themes and the melodic lead demonstrated on the title track, with the latter track making great use of a simple, catchy and reoccurring underlying riff that is bound  to get stuck in your head for days.
A penchant for medieval swordplay, epic battles and conquering enemies is a theme the band clearly embraces. Album artwork aside, there is also a strong underlying power metal theme to the album too, with the track ‘Immortal Hunt’ being the most prominent example of this. The symphonic driven ‘New Infernal Rebirth’ is a catchy as hell track, with a touch of Dragonforce in the lead guitar department, whereas the remainder of the album, while no means bad in any way, feels like it meanders in to all too similar territory as other tracks at the beginning of the album, with the exception being the epic battle metal inspired closing track ‘Wash Away Blood with Rain’ which finished the album on a great note.
The general feeling you will most likely get when listening to Fires of Life is that you’ve heard this all before, this may not necessarily be the case on a whole, but their influences can be clearly heard throughout the album. That being said, the band are still very young in terms of both age and existence, the fact that they have created a solid and highly technical release at this stage of their career, with perhaps the only downfall of it being their perceived lack of originality. This certainly sets them in the right direction, if the band can find a way of harnessing these influences and crafting a sound of their own, the future will certainly be bright for these young metallers. 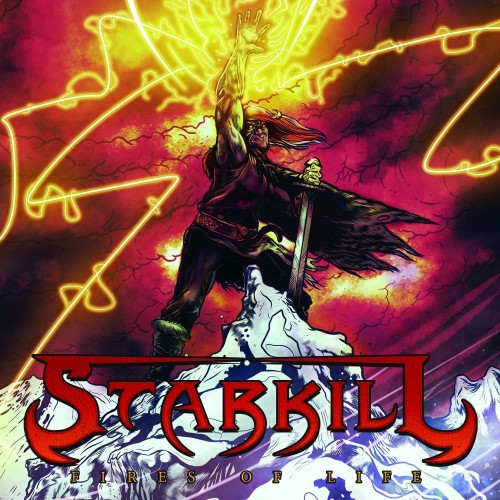 Tags: #starkill #century media records #melodic death metal #symphonic metal #chicago #usa #fires of life
Tracklisting 1. Whispers of Heresy
2. Fires of Life
3. Sword, Spear, Blood, Fire
4. Below the Darkest Depths
5. Immortal Hunt
6. New Infernal Rebirth
7. Strength in the Shadow
8. This is our Battle; This is our Day
9. Withdrawn from all Humanity
10. Wash Away Blood with Rain

In Flames, While She Sleeps, Wovenwar - In Flames nailed it again