Did you ever wonder what happened with musically very talented bands in these days of commercial nu-metal and New-Wave-of-American-Heavy-Metal? Yeah, well... me too. Cynic, Atheist, Watchtower... their fame bleaches in comparison to that of Chimaira, God Forbid, ah, you name it.

Too bad, if you ask me. Because Alarum is one of the bands that took their influences from the above mentioned musically very talented bands. Let's take a look at their latest album, Eventuality.

The subtle piano-intro of 'Sustained Connection' is soon overthrown by the extremely tight rythms of guitarists Scott Young and Mark Evans, who's virtuosity cannot be denied. with melody, aggression, subtle guitarsolos and a razorsharp sound he rips through the listener's eardrums.

The same goes for the drums: the jazzy rythms are often converted in thrashy beats that really gets it going. The extensive use of cymbals gives the music even more that experimental sound than the guitar riffs and guitar synths already provided.

While the music is influenced by jazz-death bands like Cynic, the vocals are more of the metalcore-esque side of music. Again it's a matter of taste, but I don't think that the combination of clean and metalcore / thrashy vocals fit this kind of metal. I'd rather have heard a deep grunt or a razorsharp scream here. It takes away some of the rougher moments on 'Eventuality', although the clean vocals do suit the more subtle parts in songs, like in 'Remote Viewing'.

The death-metal side really comes to life in 'Inertial Grind', which starts with a wicked blastbeat, so tight to cram your ears full of noise! Seldom have I heard a drummer this tight. Just as I thought this song would be the most heavy song of the entire album, some Deftones-like vocals (think Backstreet Boys on crack) brought my feet back on the ground. Too bad, really.

The instrumental 'Cygnus X-1' is another part of the proof that makes me want to call Alarum one of the most promising bands of the last few years: in all its simplicity, this instrumental gives a special twist to 'Eventuality' that really suites the most savage of beasts.

There is so much to say about Alarum, that a simple review isn't enough to express all of the things I heard on this album. Weird sounds (Dinar?) that can hardly be placed in any cathegory of music, smooth jazzy rythms varied with insane blastbeats... you name it, it's all on 'Eventuality'. The only minus remaining from my point of view are the displaced vocals, but who knows, I might grow into it.

As for the rest, production is superb (what else can you expect from Earache?) and even the artwork keeps you guessing as to what style Alarum are playing: that's how I like it! A big must-have for all fans of experimental death metal! 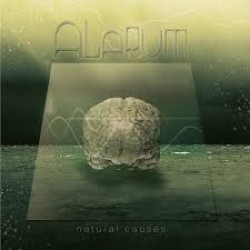