The Covering, Toxic Shock, Cliteater, Snowburner - Limburg Metal Bowling 2015
On Saturday the 24th of January 2015, for the third time the Limburg Metal Bowling Championships will be held in the small town Horst (near Venlo/Venray) in the north of Limburg/ Netherlands.
As many other metal-events, this event started as a drunken idea at the bar! After coming up with some kind of plan, to our surprise the bowling-center agreed to our drunken idea and thus Limburg Metal Bowling Championships were born. This first edition was held in January of 2012 and was an instant success. The subscriptions for all open team-spots were filled within 2 days. The second edition was held in January of 2013 and had the same instant success.
Now three years later, we are on the brink of our fourth edition, bigger, better and louder! This year with more team-spots, free live-music, the best local metal DJ’s, cheap beer, food and merchandise-stands and cheesy exploitation/horror/bowl/sci-fi movies on big screen.
Over 20 teams will battle for the infamous Limburg Metal Bowling trophy! All this during the best old and new metal-classics played by two local DJ’s.

For info on the Limburg Metal Bowling Championships, go to our Facebook-site and see for yourself why you should come :
www.facebook.com/LimburgMetalBowling
Event :
https://www.facebook.com/events/1569522816615273/
For info mail : [email protected] 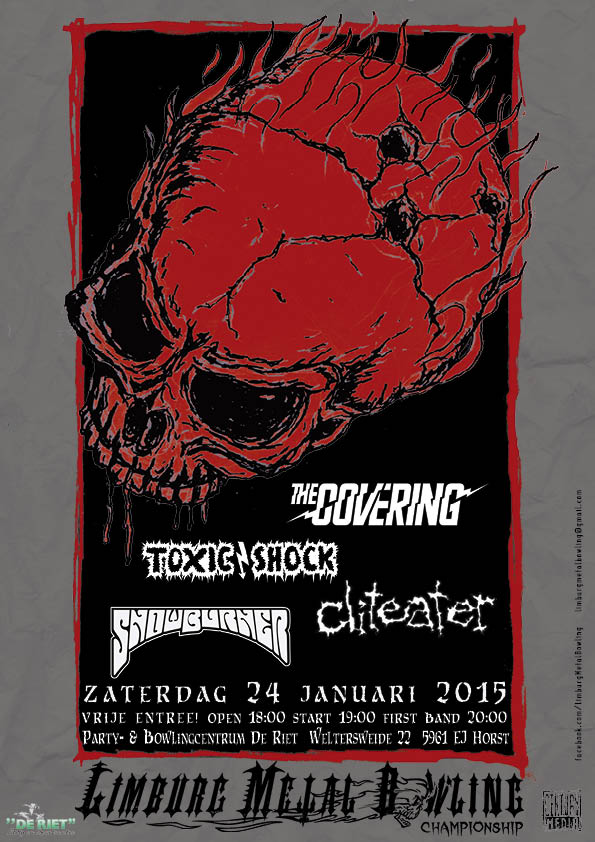