Absu, Pantheon I, Razor Of Occam, Zoroaster - Thanks for nothing, black metal!
Where Baroeg is trying to set a new trend with its afternoon shows lately, WATT decided to do it the other way around and have a so called “Late Night Massacre” which started at 10 p.m. With 4 bands on the bill, we had a long evening of black fucking metal ahead of us! Bring on the booze!
Before the gates of Satan were opened, sludge/doom imprint Zoroaster had the chance to open the ritual. They seemed a bit of a weird act between all these black metal bands, but their music live made clear they fitted perfectly on this tour. The band opened with a different drummer from Absu, who actually didn’t fit that well here. After the first track, the band’s drummer himself joined the stage and literally bashed the living shit out of his drumkit. Enjoyable to see but the volume of the drums was way too loud at this point. The band played a decent set and invited almost every other band member from the other bands on stage up to the point they were they were playing with 2 bassists, a guitarist and a shitload of singers on stage. This resulted in a bit of a mess, compared with their albums who are a bit more spacey. In the middle of the set they played a track together with Pantheon I’s bassist (which makes two bassists at the same time!) that blew me away though. The band had its moments but failed to impress me the full fourty minutes. Definitely a band to keep an eye on though! (Brent_)
Razor Of Occam is a blackened thrash metal band with two members of Destroyer 666. The band had to play with a horrible sound which immediately drained all the fun out of the show. The bass guitar was so loud, it fucked up the whole balance. Besides this, the music they played didn’t sound all too interesting so I’d suggest they just keep focussing on their main band instead. Nuff said. (DemonDust)
Time for some Norwegian black metal! I wasn’t looking forward to Pantheon I to be honest, due to the fact that they have a cello player, which is absolutely not my thing. But as soon as the band started playing it turned out just fine. The cello’s volume wasn’t too loud and even though the drums were triggered (even the snaredrum!) I was pretty impressed by drummer Mads, who played in 1349 as well, just like a lot of the band members from Pantheon I. A steady 30 minutes of true Norwegian black metal as result including tracks like ‘Burn the Cross’ and ‘The Last Stand’, and just like Zoroaster, a few guest appearances as well! Sounds more like it! (Brent_)
Headliners Absu were what the audience was really waiting for, so their hour long set was embraced with many cheers, moshpits and horns in the sky. Personally I couldn’t detect what all the fuss is about, their songs didn’t really grab me all that much. Yet the excellent execution of their songs did make clear that these guys know how to handle their instruments. Also vocally they offer a wide variety of screams and such, and it was amazing to see that the lead vocalist is actually the drummer of this band who blasted his way through the setlist, screaming his lungs out at the same time. He also announced the songs in the grimmest way possible, which was quite funny at times. In the end I’d say they left a very well pleased audience, but I can definitely say that this band doesn’t work for me. (DemonDust)

Pictures by the lovely Leena Cho. Thanks! 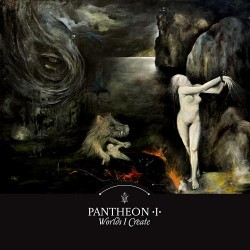 Pantheon I - Worlds I Create