Incubate 2013 - Friday - Freaky Friday!
Every year the Incubate Festival is the place to be for every adventurous metal-head! This festival has so much to offer in cutting-edge underground art in its biggest form. Whether it is an artist that makes music with plants, underground hip-hop, oldschool acid house, underground movie-makers or just harsh, cold black-metal, you’ll find it on this festival!

First thing that showed on the Friday, the first day I attended this festival is the great number of foreign visitors. I think Incubate is slowly evolving in a big house-hold name in the underground movement and just like Roadburn is becoming an essential festival for the Netherlands and Tilburg.
Friday

First band that kicked off the Friday, were the UK sludge-mongers of Iron Witch. I heard quite a bit about this band before the show, so I was anxious to see them. From the very first tone on, it became clear what their biggest influence was, namely EyeHateGod. In fact EHG was the blueprint of this band! They had some good riffs though and they enjoyed themselves; at least the band did. The singer looked a bit nervous and out of place and after a couple of songs his vocals and stage show became quite boring! After half an hour, I decided to leave the batcave and during the walk from the batcave to the Green Room, I wondered if I’d seen Iron Witch or an EyeHateGod cover band?
Serpent Noir was the band I walked into in the Green Room. This German band plays in monks-cloaks on stage and plays crusty sounding black-metal. It all sounded really good, with a nice rock’ n roll vibe in their vile black metal, but I kind of had the feeling I already heard that ten times before. Nothing wrong with that, but nothing outstanding as well.
Next band were crusty, sludge bangers Dead Existence, which clearly came out of the same scene as Iron Witch and probably shared a van. One of the guitar-players broke a string on the first chord he played, so they had bad luck from the start. What followed was an o.k. mix of crust/sludge and grindcore, with a really energetic singer!
Khold were the first band to play the main-venue of the 013-venue. Khold is basically the follow-up band after Tulus went on a hiatus. Khold produces raw, experimental black metal, with a good thrash ‘n roll vibe in it! From the few songs I saw of their performance, I was kind of disappointed by the people’s lack of enthusiasm. I thought this band would raise more eyebrows than this cold, static reaction! The band did their best though, but I don´t know if it was the lame reaction by the crowd or just the fact that all the songs sounded a bit too neat, the spark wasn’t there!
Link was the first band I saw in the V39, a venue across the 013-venue. This venue however, would turn out to be a pain in the ass time-table wise. Apparently there wasn’t a professional stage-manger over there, which resulted in bands not playing on time or still sound-checking when they should play. This was especially bad for the bands, because a lot of people just left the venue and went to see another band instead. This Belgian crust-trio delivered a good crust show though! They were a quartet in the past with a female vocalist up front. None the less, they delivered a good crust show in the vein of Victims with a hint of From Ashes Rise/His Hero Is Gone. Pity no people showed up/stayed, so there was no atmosphere at all.
Verbum Verus was next up in the Green Room. This local, cult Tilburg black-metal band consists out of members of the old black metal band Sauron. They absolutely delivered the full deal with a good stage-setting full with candles, skulls, etc. Their singer/guitar-player came on stage with a bloodspitting act, covering the front row in blood. Musically the played really good, raw, atmospheric black-metal. Pretty good show, I definitely want to see more of this band! 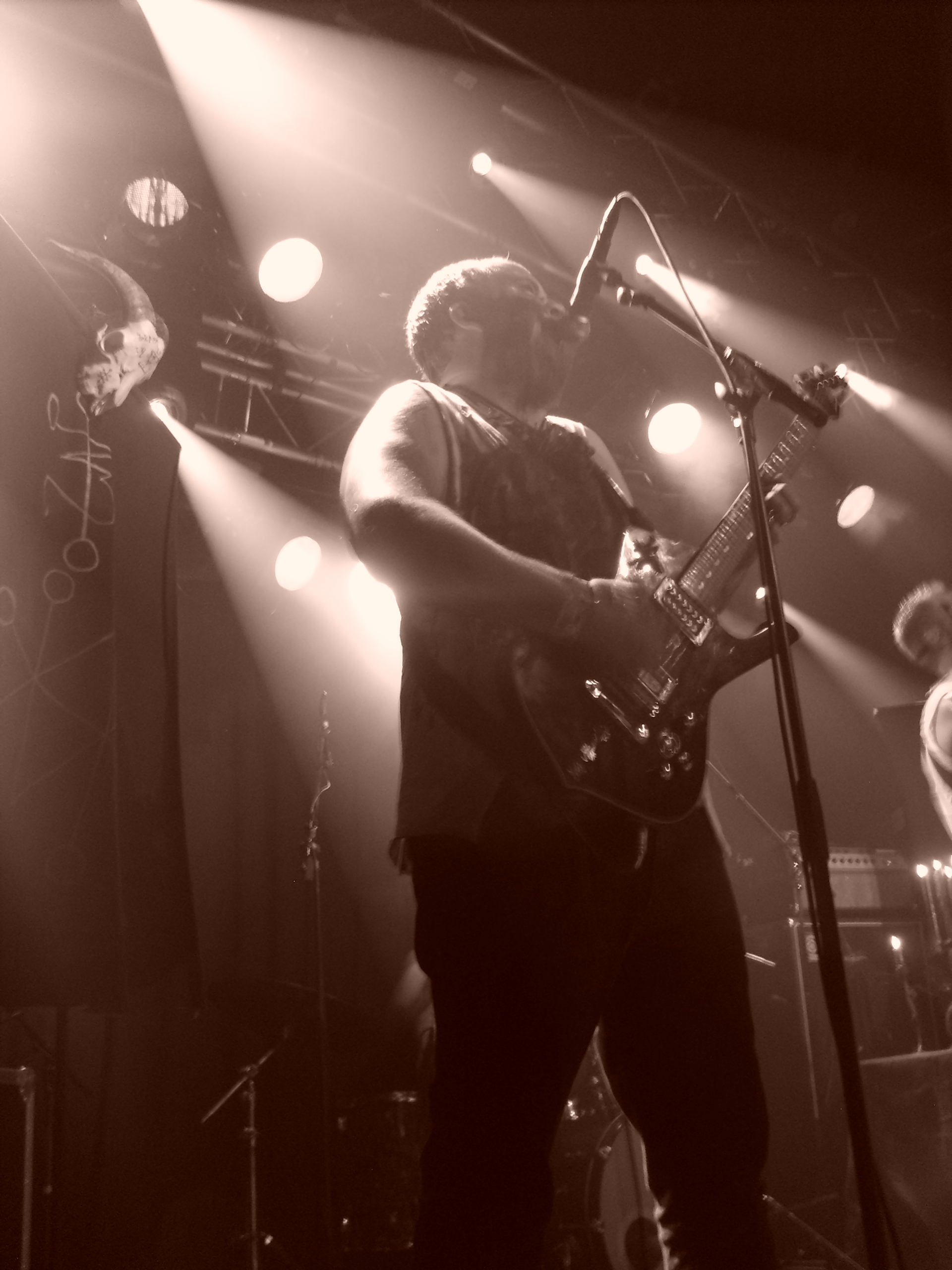 After talking to some people the next band I witnessed from the balcony was Funeral Winds. This was actually a good show; the band totally worshipped oldschool thrash/black-metal bands like Bathory, Venom, etc. and delivered a great thrashy black-metal show. Really good oldschool vibe going on music and attitude-wise. This resulted in the first headbanging, moshing frenzy party! They really got the crowd going. Good oldschool show.
Due to the total delay in V39, I still could see same songs of O, insteadof Age of Woe who were already supposed to play. None the less, I was glad to witness some songs of this interesting German post-metal band. They used an old medieval instrument, within their songs. Musically they produced, eerie, atmospheric post-metal, but with some interesting and original twists. A band to keep an eye out for!
Mayhem was next to demolish the main venue. It became pretty clear, that a lot of people tonight came to see two bands! Mayhem and Immortal. The big venue was absolutely packed. Mayhem absolutely outdid themselves with the stage-show. It was the full deal with banners, candles, statues and pigheads. And on top of that, the Robbie Williams of black metal! Attila walked on stage and just showed, “I shall entertain you my sheep” attitude! Brilliant as an entertainer, he held the crowd in his grip. Apparently Mayhem had recruited two new guitar-players again. The third song of the setlist was already the classic ‘Deathcrush’, which got the crowd going. This was actually a really good show, especially show wise, but somehow it missed something! Maybe these bands are better in small, filthy venues? None the less, one of the tightest shows I’ve seen of Mayhem.
I got a surprise in the batcave after Mayhem, by the French band called Neige Morte. This band was by far the best, original and experimental band of the Friday. This drum/guitar/vocal trio delivered us a brutal, experimental piece of freak black metal! Imagine Mr.Bungle going black metal, or Fantomas jamming together with Sunn O)), something like that. The show was really energetic, loud and crazy, the guitar-player getting all kind of crazy riffs out of his instrument and looping them. This was by far the best band of Friday, but it is really hard to pin-point this band. It goes from black metal to drone, from freakrock to hardcore, but somehow they manage to produce a very unique own sound!
Immortal pulled the biggest crowd on the Friday in an absolute crammed main-venue. This resulted in an empty Green Room for Chaos Invocation, unfortunately for them. I’m still surprised that this KISS of black metal band is so largely accepted by the underground black metal scene. Abbath and co came on stage, struck a chord and lit the place of fire! The crowd went absolutely berserk for this band. I do admit that some of the songs are very well crafted, catchy black metal tunes, but somehow I also see a big rock ‘n roll band, that I can’t take seriously as a black metal band! None the less, solid, catchy show with a highly entertaining rock ‘n roll value. Abbath is a bit of a poser though… 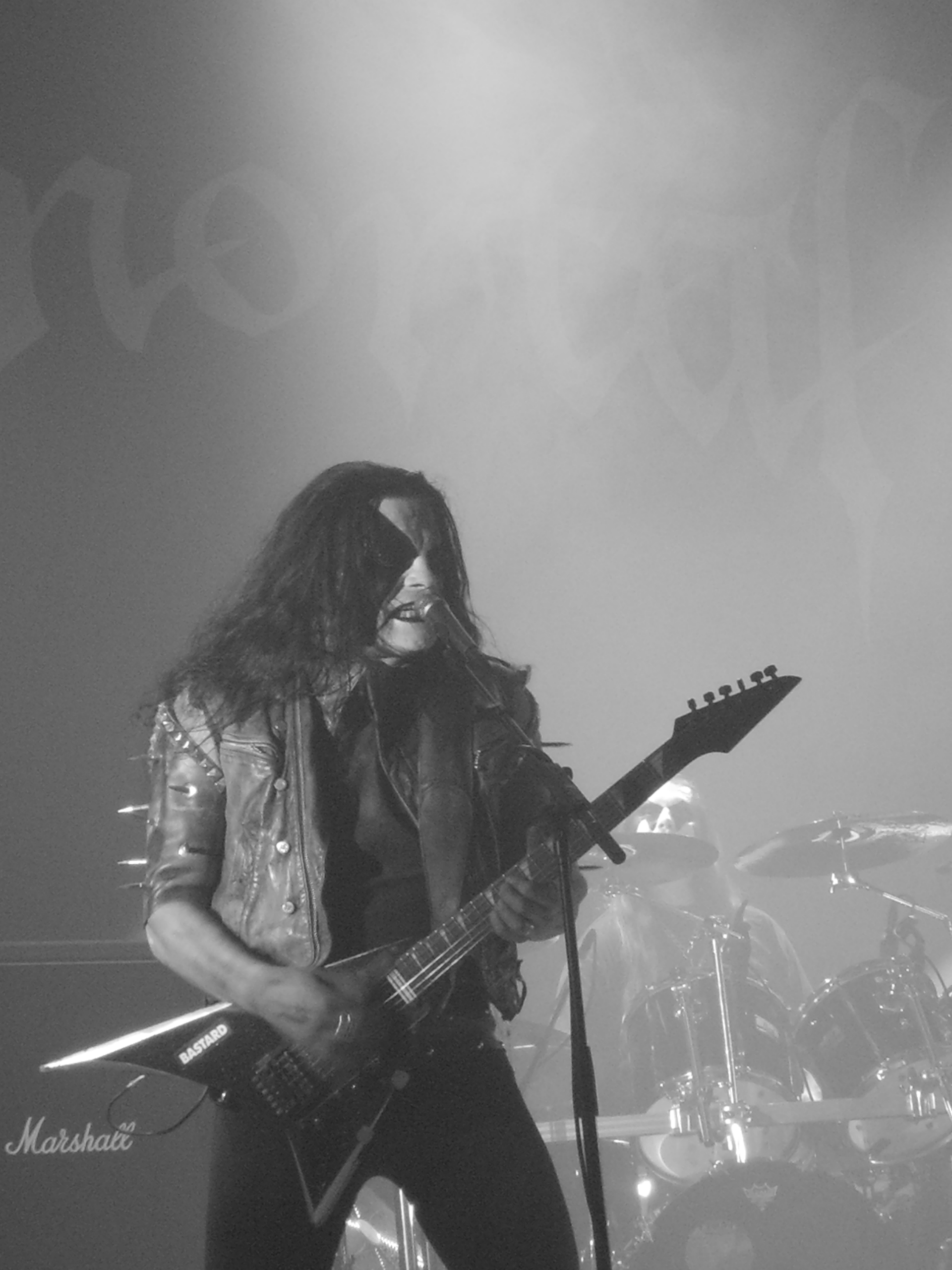 (Picture : Lindsy Bouten)
Dragged Into Sunlight finally dragged themselves out of the dark! Instead of the pitch dark stage setting with strobe-scopes, we finally saw what this band looked like! Scummy Englishmen, with actually a nice stage setting with chandeliers and deer-skulls. The batcave was absolutely packed for the English band and I totally understood why! They produced an absolute powerhouse sound, with a fierce punishing sound. Really good, intense powerful show, by this band.
I don’t know why they changed position, but personally I liked the bass-players voice and performance better then Davidoff’s voice and performance. None the less, Sonne Adam crushed the Green Room with the thick, chunky doom/death metal. Unfortunately for them they played at a time, most people were to drunk or buggered of to their homes. This resulted in only a half full venue with no atmosphere. Pity, because Sonne Adam belongs to one of the best new death metal bands around at this point!
Details Written on Wednesday Oct 2nd, 2013
Writer @RoyBalowski