Incubate 2013 - Saturday/Sunday - Tilburg on fire!
Saturday
After a very busy, totally crammed Friday, I was kind of relieved that the Saturday was kind of not that busy with things I needed to see. Although there was still plenty of good bands playing that day, I kind of felt I had time to breathe and enjoy the great city of Tilburg.

After a funny, but also kind of interesting exhibition of an artist making music with plants, I planned on to see Teeth Of The Sea, but somehow the finished a bit earlier, so I missed out on them. Instead I walked in on Public Service Broadcasting from the UK. This duo is not exactly metalrage material, with their mix of electronics, post-rock, TV samples and loops, but was probably one of the better shows I’ve seen this weekend. Instead of vocals they used old TV-commercials, also to inter-act with the audience, which resulted in a great atmosphere and a few laughs.
After that I walked to the always nice and cozy Cul De Sac, to check out Luxembourg math-rockers of Heartbeat Parade. They kind of took me by surprise, with their hectic and very energetic show. Their instrumental math-rock/metal had a lot of energy and hooks and they gave a very powerful show, for a packed venue. Imagine The Dillinger Escape Plan jamming with Tomahawk. Not as extreme as Dillinger, but still with the same hooks, breaks, energy and craziness!
Viscera were an unfamiliar name for me, but the Italian post-metal/sludge band blew me away! This trio had an absolute bulldozer sound, that reminded me of Today is the Day a bit, but with more sludge/doom elements. Especially their drummer hit his skins with full power. Aggressive and powerful stuff! Unfortunately for them, not a lot of people showed up. None the less, a band to keep an eye out for!
Hexis was a band I had high on my priority-list to see and check out! Unfortunately for me Hexis decided to start a bit earlier and only give a show of 20 minutes instead of the 40 minutes planned. I literally walked in on the last notes. And judging by the reaction of the crowd, I had missed out on something. Just like Dragged Into Sunlight did in the past, Hexis plays in total darkness with just some strobe-scopes flashing. Apparently they caused a very claustrophobic atmosphere during the show, with even disorientation among the visitors! Check out this crusty, post black metal band if you can, I surely will!
Lola Colt was a bit of a surprise as well. Not sure how to describe this band, but it might be interesting for readers though! Imagine an innocent sweet-voiced girl that sings for a noisy, post-rock band; with a lot of different influences and you have a picture! In a packed Cul De Sac, they set the place on fire, with a really good feedback from the crowd. Interesting band…
We were just in time, to see some songs from Tulus in Extase. It was fun to hear them playing ‘Slowly We Rot’ of Obituary as an encore. From what I’ve seen, it was a really good and entertaining show, with a band that really enjoyed playing in a small venue, facing loads of people in front of the stage!
In V39 The Devils 3rd, got the change to present themselves to a bigger crowd. This new local thrash-metal band, which had played only a handful, shows before this one. They played an energetic show. With their vocalist Frans, they absolutely have a performer purr sang in front of the stage, but musically they still need to develop a lot! It sounds like simple thrash-metal, but still with some rough edges. Also the band could be a whole lot tighter. It is too simple and not powerful enough. None the less, they enjoyed themselves and their friends that came out to support them! Frans even got to swing on the ceiling to get the crowd going. With this working attitude, this might be a band to look out for in the future.
After that we kind of called it a day and went home quite early. Apparently Rectal Smegma did a good show, turning the Little Devil upside down!
Sunday
The Sunday promised to be a very nice day as well, just like to the day before with a bit more breath-room and time to enjoy the city of Tilburg.

First band that absolutely kicked our heads in were the Belgium warriors of Hessian. They just released a mammoth release on Southern Lord Records, so I was curious to see how it would turn out! Well, these Belgium guys certainly woke me up on this Sunday. Their crusty metalcore, with influences of Rise and Fall, Entombed and From Ashes Rise, did the trick! In matter of seconds I was pumping my fists in the air and banging my head and I wasn’t the only one. Also their singer had a very powerful voice, really good show to start the day… 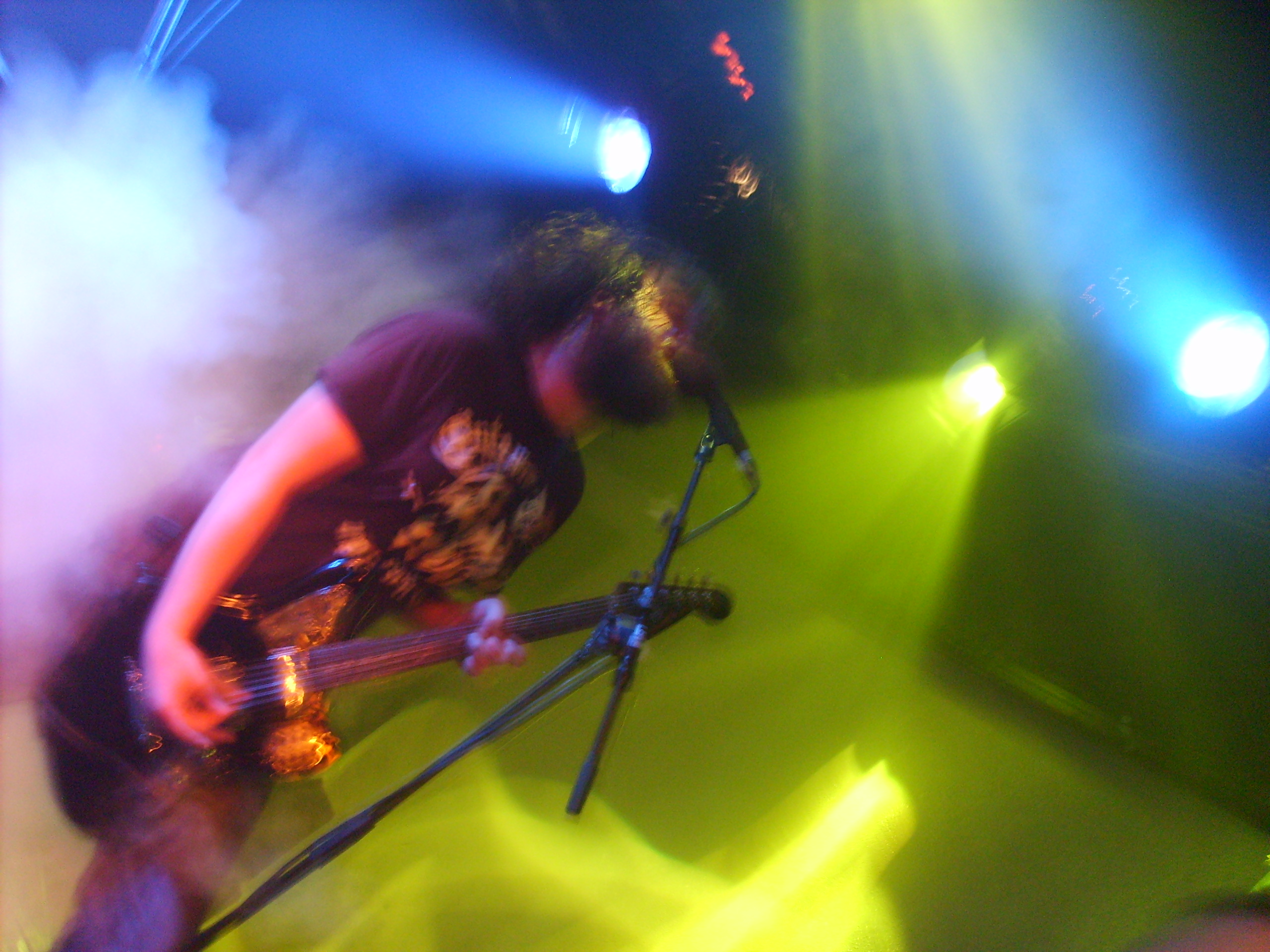 After the powerhouse of Hessian, it was time to go to the Green Room and see true crust heroes at work. Two years ago at the Roadburn festival, Doom floored everyone with their metallic d-beat crust, so I was curious to see if they could do it again. Yes, they can! After some inspiring words, Doom blazed away with their 45 minute set of classic crust. Really good to see, that the original line-up got back together again and that they enjoyed playing again. During the set we got a lot of old songs, but half way through the set, they also presented some new songs for an upcoming album. Expect classic d-beat crust from these fellas! Inspiring, tight and energetic show, unfortunately the venue was half filled. None the less, the people who were there enjoyed the show. 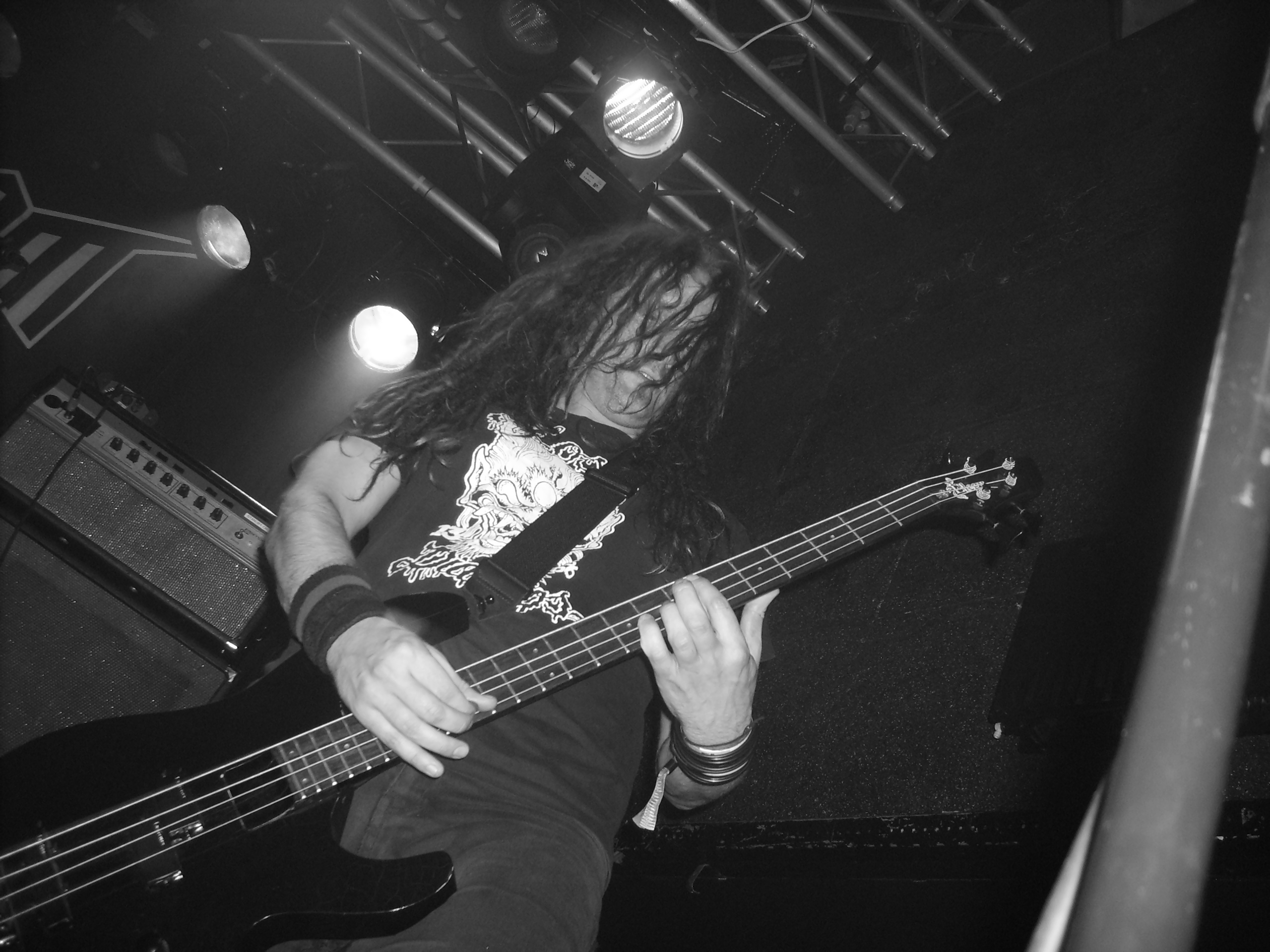 After a punishing set of crust, GG:ULL out of Tilburg played the batcave. For me this was a total new band, but I spotted some musicians in the band that already earned their credits in bands like Reveal and Transmission O. This band floored me; they gave away a real heavy, good show! Their doom, noise, post-metal is refreshing, heavy, intense and played with passion. I really hope this band will play more shows, because the intensity of this show, tasted like a whole lot more. A band that came in mind was a slower Wolvhammer, with more post-metal influences. Their singer/guitar-player also had a really intense, strong voice. A really good show, by a very promising new band.
Being beaten to pulp by the previous 3 bands, it was a breath a fresh air, to witness to psychedelic rock of White Manna. The Extase was absolutely packed to see this space/psychedelic outfit rocking out on stage and that is what they exactly did! Really good rocking vibe, with people trippin’ and dancing in front of the stage. Imagine Dead Meadow, Graveyard and White Hills, jamming together in the Californian Sun and you see the band called White Manna. Really good psych-rock, which deserves more attention!
After some trippy tunes of White Manna, it was back to business as usual and go to see some heavy, distorted tunes. We found that in the basement of the V39 in the form of a Belgium trio called Severe. Unfortunately V39 still had problems concerning time-tables and again bands didn’t play on the time, they were supposed to play. This resulted again in an empty basement for Severe. Pity, because the stuff this drum/guitar/vocal trio bursts out, was quite impressing! Really heavy crusty metalcore, with a huge dose of black metal. A bit like Black Breath, but with a more black metal approach. The band didn’t seem to be bothered about the very few people watching and absolutely went berserk on stage. Cool to see a band not giving a shit and performing for the full 100%. Awesome show, by an awesome band!
Next up were American post/sludge mongers of Generation Of Vipers. They released their album on their own record-label and it has stirred the underground movement quite a bit! This band is often compared to Neurosis, but from what I saw, I do not agree one bit! This trio does have elements of Neurosis, but also more hardcore/metal/crust elements. Also their singer/guitar-player seems to have a slightly different approach in writing riffs and comes up with some interesting songs. The show was pretty good, with good songs/riffs. Finally also some people decided to stay in V39 and watch the band, which resulted in a nice atmosphere. None the less, I couldn’t help to have the feeling this show was a bit messy and sloppy. A mediocre show by a band, that could do better I guess…
After all these heavy tunes, we decided to end our Incubate 2013 with the power blues/soul of Willis Earl Beal. He was supposed to play on Saturday, but apparently his band hadn’t arrived in Tilburg on the Saturday, due to miscommunication. His show got rescheduled to the Sunday-night! Awesome show, by an awesome artist, but not exactly metal, but I couldn’t wish for a better salute of Incubate 2013! Will see you next year again…
Details Written on Thursday Oct 3rd, 2013
Writer @RoyBalowski