Lost Soul - Immerse In Infinity
I was a bit let down by the Poland scene last year; Vader’s new album was absolute shit, the new Behemoth didn’t match my expectations and the new Azarath didn’t give me the goose bumps either. But suddenly, completely out of the blue, one of the best death metal albums of the year emerged from the cold eastern corner of Europe.
Lost Soul has been around since 1991 already but for some reason I’ve never heard of them before they unleashed Immerse to Infinity. Not strange, as the band broke up a while and only released 4 full-length albums in their 19 years of existence. With a fresh new lineup after some member changes, they are back with the release of their fourth album Immerse in Infinity.
As most of the polish death metal bands, you can definitely hear Lost Soul is coming from Poland and taking some influence from bands like Vader, but Lost Soul definitely adds something extra. First of all, their tracks are way longer, some even peaking at 8 minutes. This really gives drummer Desecrator the space to show his capabilities on the drum kit because they are beyond intense. I haven’t heard a drummer playing so many straight forward blasts as well as adding creativity in cymbal and drum roll use in a while. Second, the guitar work is just plain awesome. The double guitars work perfectly on fast parts as well as mid-tempo parts where the band gives some space for some soloing. On top of it all there are some really smooth minor jazzy bass/guitar licks in between, giving the tracks just a bit extra. Vocal wise there is nothing special to say actually; unsurprisingly they remind me a bit of Behemoth and Vader but are a bit more powerful. The band’s instrumentation is its main focus anyway. Besides the straight forward blast tracks such as the opening track ‘Revival’ and my personal favorite of the album ‘One Step Too Far’, there is also some mid-tempo work on the album such as ‘…If The Dead Can Speak’ and ‘Breath of Nibiru’, making it a fine album to listen to.
Final verdict? Immerse in Infinity is definitely one of last year’s best death metal albums. The long but intense tracks never get boring and the instrumental capabilities of the band members are so extremely enjoyable to listen to. I hope this will finally get Lost Soul on the map and on the road as well. If the band can match the standards they have set on cd, we can expect something huge! 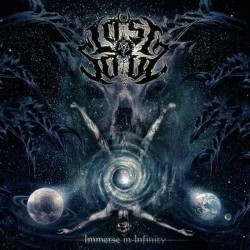