Fortarock 2014 - It's all about heavy music
The 31st of May it’s FortaRock time again. This one day metal festival in Nijmegen, The Netherlands is up for its sixth edition already. The location of the first four editions was at a park called Brakkenstein, but when celebrating their lustrum last year they added XL to their name and moved towards the much bigger Goffertpark. Big international artists, such as The Rolling Stones, Metallica, Pink Floyd, AC/DC, Kiss and Guns ‘N Roses, have played here and last year it was headliner Rammstein who blew everyone away with a show larger than life. This year they deleted the XL in their name, but stayed at the bigger location. With Iron Maiden as the headliner and in total 18 bands ranging from black to thrash and from hard rock to metalcore today was all about heavy music. 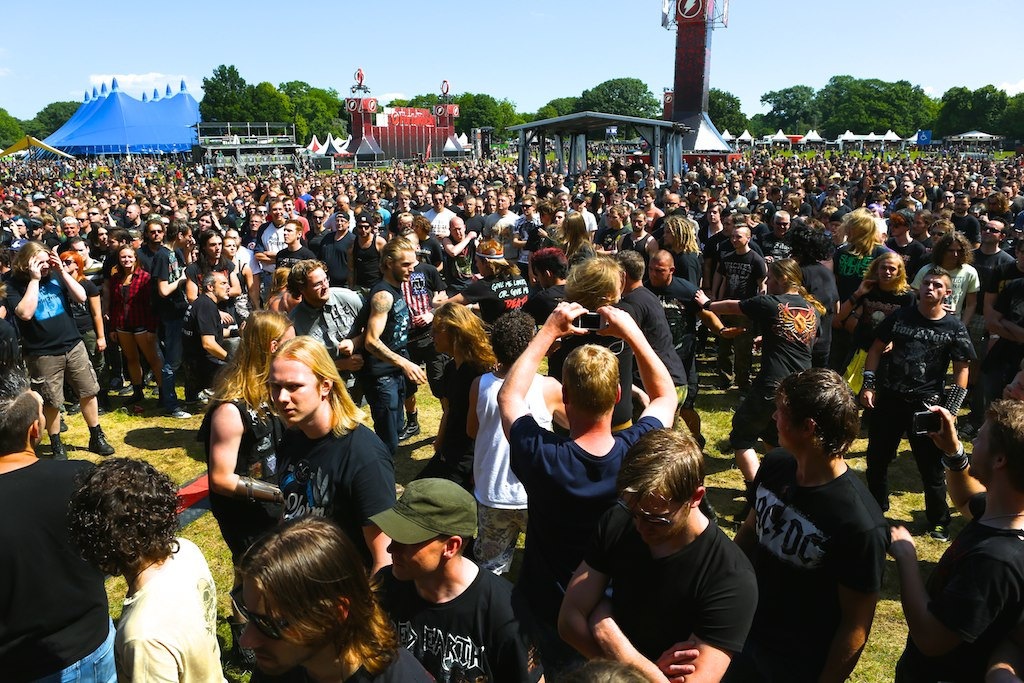 Adje Vandenberg did impress me a lot at the Paaspop festival this year with his new band called Moonkings. So it was pretty obvious I wanted to see how these guys would hold up on a huge stage in front of ten thousand people. Well, they failed miserably, although I do have to say it’s not on the account of the band itself, but due to a lot of technical problems with the guitar of Adje. Most of the time it was to soft in the mix and sometimes it wasn’t there at all. Still the band did their best, but the damage was already done. Not even ‘Burning Heart’ and ‘Here I Go Again’ could save the show. Better luck next time. (Niamen)` 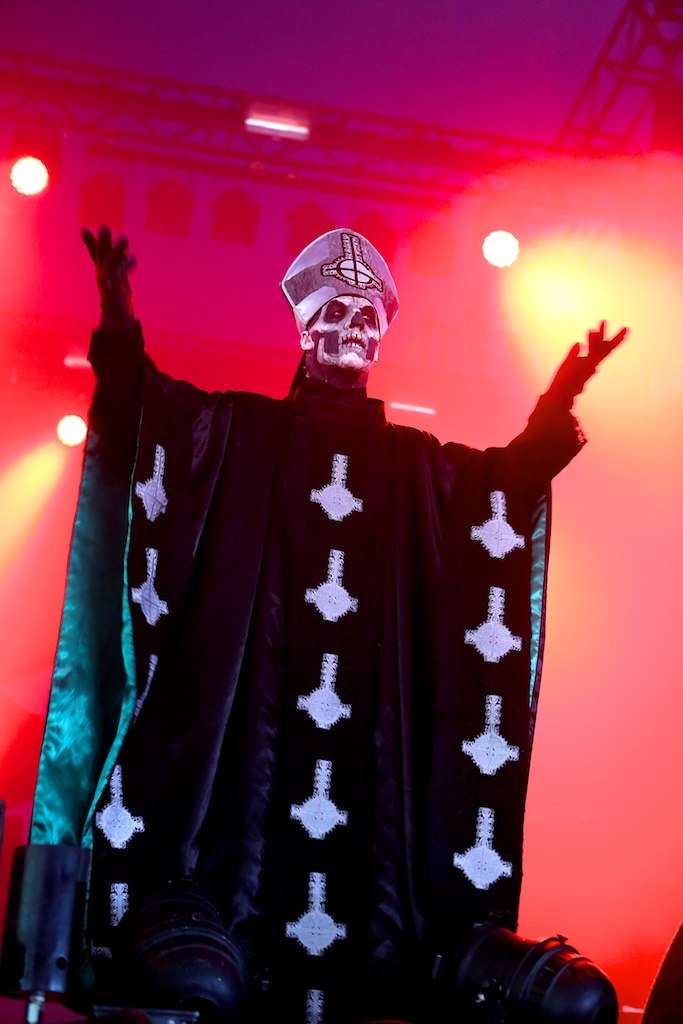 When walking towards the tent stage I was stunned by the amount of people wanted to see Ghost perform. I was in the presumption the hype would have been over by now, but they still attract a lot of people to their show. And by playing a 50-minute set the band justified why all these people showed up. The sound was crystal clear, the stage performance was great, they played flawless and especially the vocals of Papa Emeritus II were stunning. With this psychedelic rock/metal show full of rituals the band proved they’re definitely not hype and they’re here to stay. (Gilles)
Back in 2012 Trivium also played the FortaRock festival and you could definitely see they’ve evolved. With a full field in front of them they delivered multiple hits, but unfortunately not the heaviest they have. With songs like ‘Anthem (We Are The Fire)’, ‘Down From The Sky’ and ‘Dying In Your Arms’ they choose to show the softer side of the band. Maybe it had something to do with singer Matt Heafy having some problems with his voice recently. Anyway, the played solid, but personally I wasn’t too fond on their setlist. (Gilles) 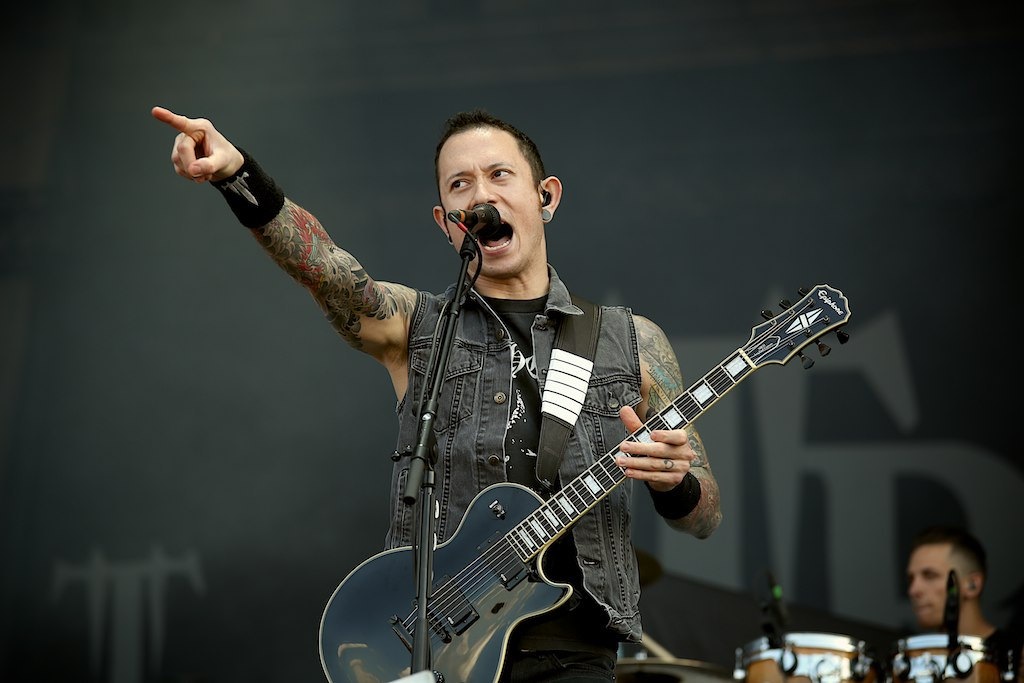 Due to a personal pit stop and grabbing a beer I arrived at the tent stage when the polish black metal heads of Behemoth had already started. To be honest I was pretty eager to see them live. Their latest effort The Satanist is truly one of the best albums this year so far. The intensity of this album is really high and I was curious if they could pull this off onstage as well. Within seconds of my arrival they immediately convinced me. With four songs on the set list of their latest album (‘Blow Your Trumpets Gabriel’, ‘Ora Pro Nubis Lucifer’, ‘The Satanist’ and ‘O Father, O Satan, O Sun!’) it was pretty obvious that Behemoth are truly convinced about themselves and their latest material. But of course they have all the right to do so. Certainly one of the top performances on this year’s FortaRock. (Niamen) 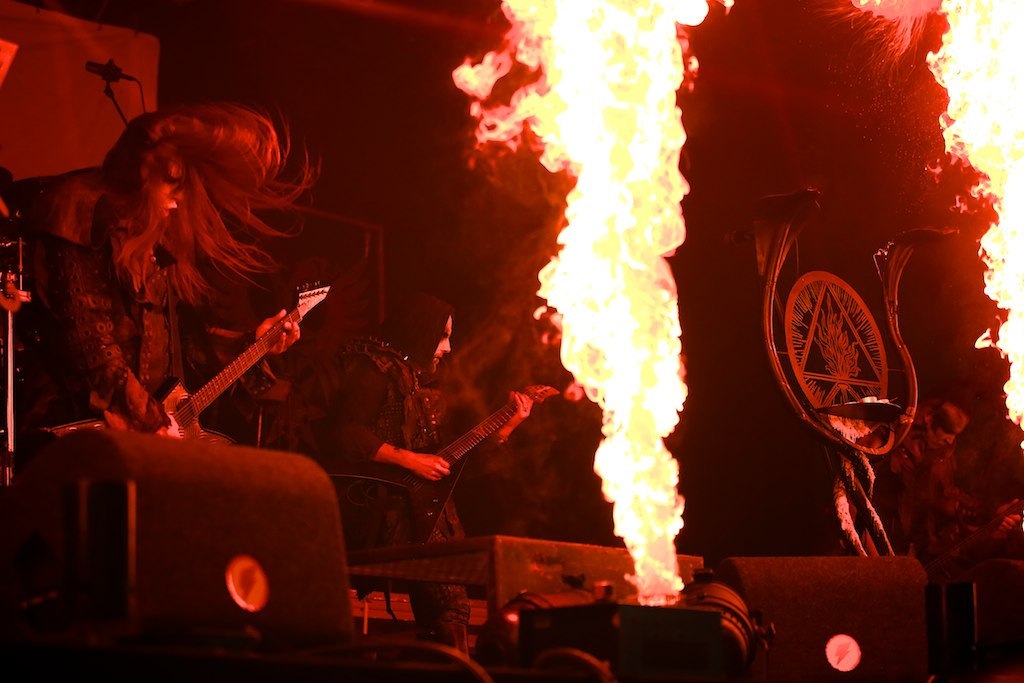 For me personally the toughest choice of the day: Gojira vs. Deafheaven. It became a last-minute call to go and watch Deafheaven’s show on the smallest stage of the festival. With their record Sunbather being one of my favourite heavy record past year, but with them playing an open stage in the middle of the day, it could go either way with this. Eventually the show was good, the songs were great and the audience was really enjoying it, but to give it the special, extra touch they should have played the tent stage. Not because the size, but mainly because of the atmosphere they want to create. All in all I’m not disappointed by my choice at all. Especially when knowing Gojira (together with Slayer) will play at the 013 venue in my hometown Tilburg at the beginning of July. (Gilles)
After having something to eat we decided to go and see Swedish hard rock act Graveyard. With a laid back rock show they however fuelled our after-dinner dip and to prevent we would take a nap we rushed towards the tent stage were hopefully Carcass would give us the dose of energy we needed. And with a hefty display of their power they fortunately succeeded in giving us this energy kick. The extreme metal of these Liverpudlians was performed very tight and this was just the heaviness needed to prepare for Slayer’s upcoming gig as well. (Gilles) 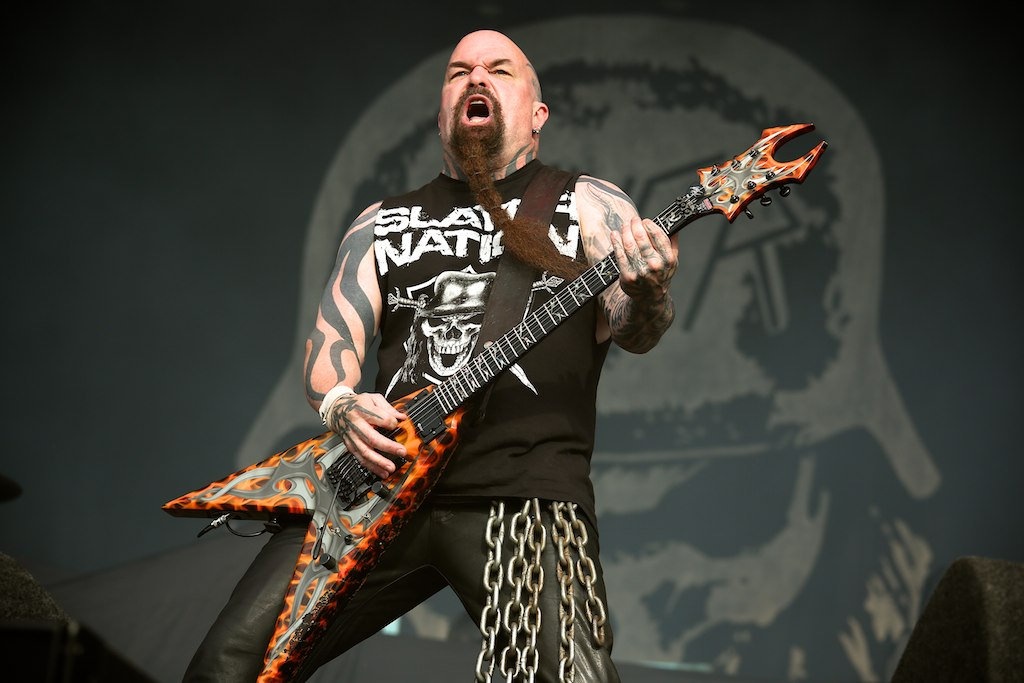 What’s there to tell about Slayer that no one has ever said before. Indeed nothing. Slayer was at FortaRock, did play the regular hits, a lot of people drank a lot of beer and everybody started moshing during ‘Raining Blood’ and ‘Angel Of Death’. Oh, and Tom Araya is getting old and has a grey beard. (Niamen) 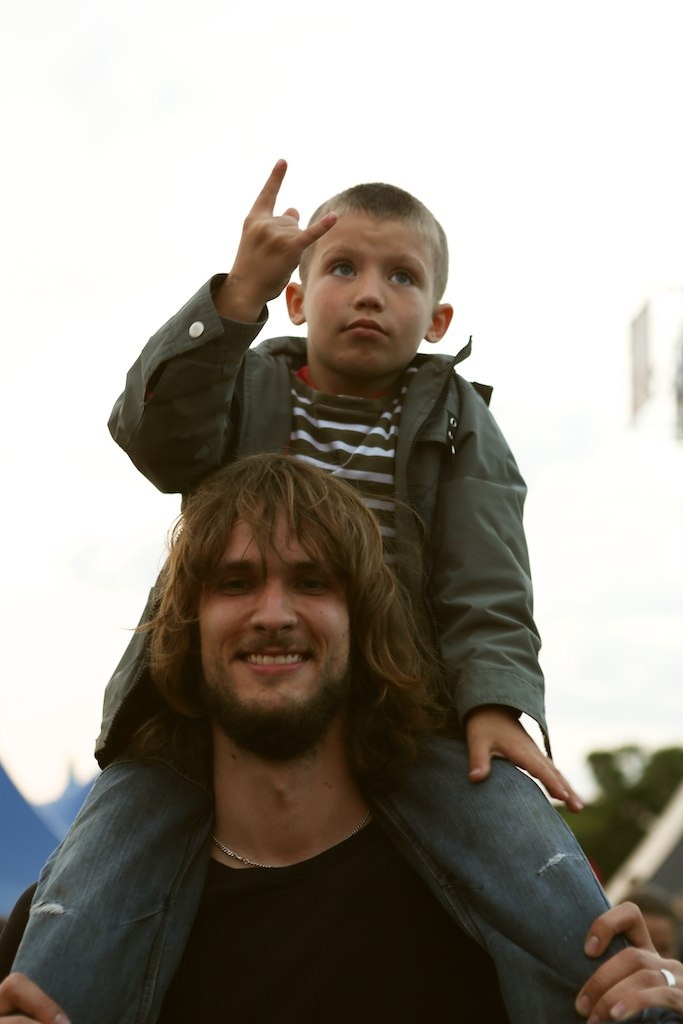 It came as a quite surprise to me that Anthrax would be closing the smallest stage at FortaRock. These guys definitely need a bigger spot, especially by judging the huge amount of people present in front of the stage. Anthrax themselves did what they do best, playing their enormous range of hits. ‘Madhouse’, ‘I Am The Law’, ‘Indians’, they all were on the set list creating a bigger and better party vibe with every song they played. Certainly the right way of saying “We don’t care on which stage you put us, we can throw one hell of a party anyway”. (Niamen)
To close this sixth edition of the festival headliner Iron Maiden dusted of their Seventh Son Of A Seventh Son world tour props one last time for 2-hour show full of classic songs from the 80s. With an energetic show as usual the band fired up the crowd to sing along every word. Contrary to their last year’s Maiden England tour they’d made 3 changes in their setlist. They added ‘Revelations’ and ‘Wrathchild’ in favour of ‘Afraid To Shoot Strangers’ and ‘The Clairvoyant’ and instead of closing with ‘Running Free’ they now decided to end the night with ‘Sanctuary’. With furthermore killer heavy metal tracks like ‘Can I Play With Madness’, ‘The Trooper’, ‘Wasted Years’ and many others we had a great night and the festival was closed with style. When this band continues this way “Scream for me, Holland” will never sound outdated. At every single occasion they succeed in making it a memorable night and always with a different touch contrary to the previous time they’d perform at a certain place or country. (Gilles) 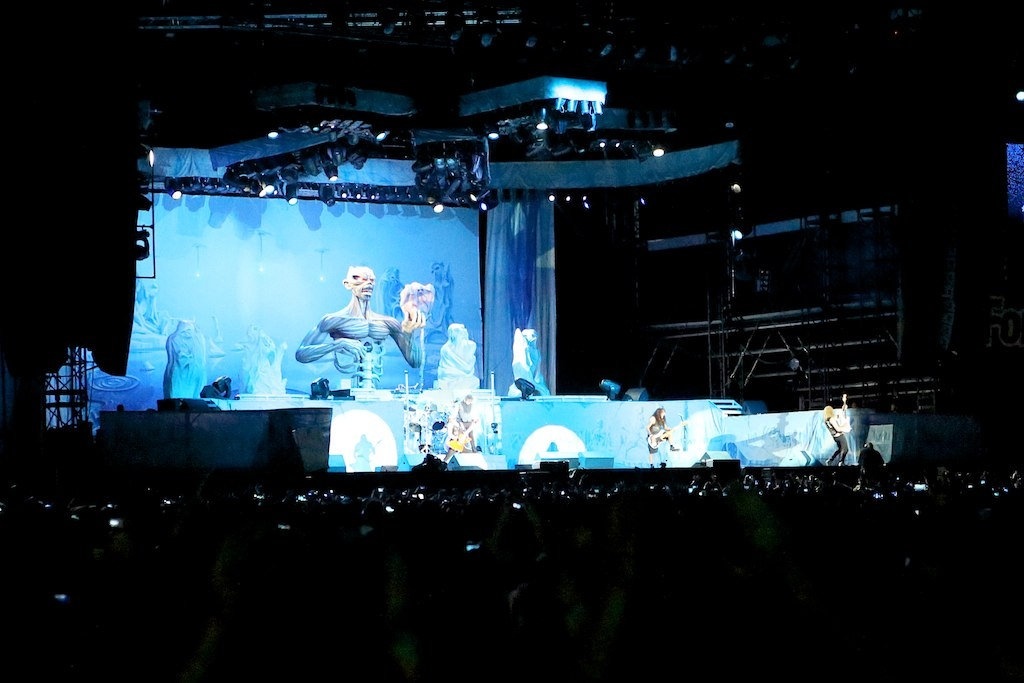