My Dying Bride - Next year's headliner of Roadburn

Due to some stupid meeting at my work I wasn’t able to catch the support act of the evening since Oceans Of Slumber was scheduled at 7PM. So after I rushed myself to the venue I was a bit bummed out that I had to miss the support act of the evening. Especially since I entered the building when they had just finished playing. According to several visitors the show was quite okay but a bit proggy.

After some short interviews with visitors about the support act I decided to grab a drink and find myself a sweet spot for My Dying Bride. This was very easy since the venue wasn’t sold out. They even closed the balcony. Which is pretty strange for me since I expected way more tickets to be sold than a couple of weeks ago with Amorphis. I don’t know if it has something to do with the fact that Roadburn is just one week away. But on the other hand all those chickens that didn’t have the guts to face My Dying Bride missed quite a show. The last couple of years the set list has been altered for many times and because of the huge amount of great My Dying Bride songs it’s always hard to please everyone. But tonight they did quite a good job to satisfy me and all the other visitors. Starting with ‘Your River’ from the infamous Turn Loose The Swans album and ‘From Darkest Skies’ from The Angel and the Dark River they immediately pulled out two great albums. After this the new song ´And My Father Left Forever’ shows that the new songs are quite a match for the early work of the band. 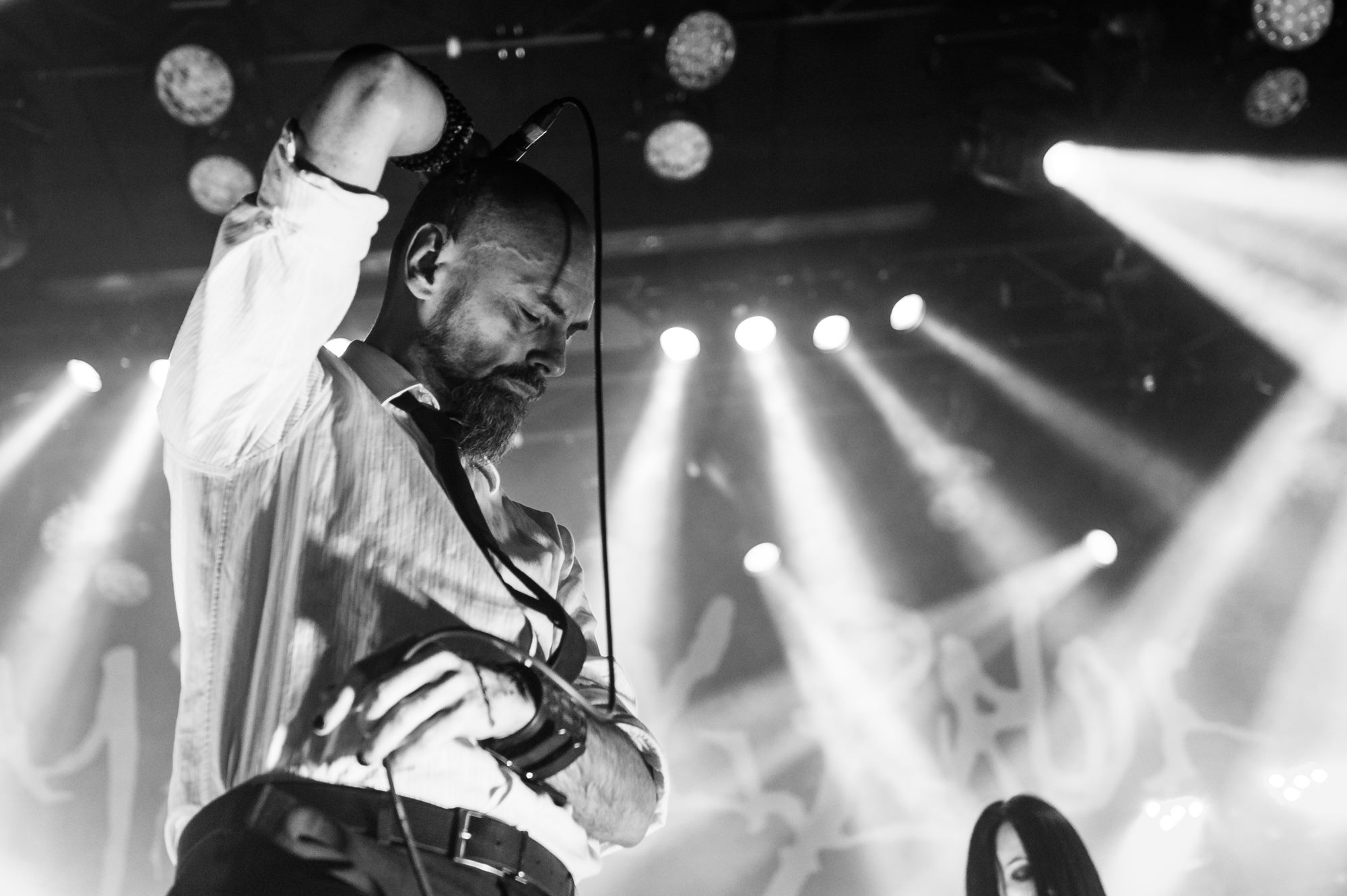 Vocalist Aaron Stainthorpe, dressed in a white blouse with a red tie showed himself once more a great vocalist and even better frontman. The guy manage to grab the audience by the throat and drags them down into the darkness of My Dying Bride. He embodies the pain and misery that is described in the lyrics of the songs. He spits out his growls over the audience or he mumbles and moans his spoken words into the microphone. Sometimes he even loses himself so much in the song that he almost looks a bit scared when he opens up his eyes at the end of the song.

After ‘Feel The Misery’ and ‘Thy Raven Wings’ the band decided to take everything along to a darker path and starts with ‘The Prize Of Beauty’ followed by ‘Erotic Literature’. This is a turning point in the set, the red tie of Aaron has come off and he takes the venue deeper into the misery with ‘The Cry Of Mankind’ and ‘She Is The Dark’. Between those two sets of songs another new song is played, ‘To Shiver In Empty Halls’, and once again it shows how easily it can measures itself with classic My Dying Bride songs. During these 5 songs My Dying Bride is clearly working to a climax. The intensity of the show increases as well as the headbanging. Pretty obvious they let the crowd hungry for more when they went offstage after the last song.

During the encore they definitely delivered the final blow. Starting with easy with ‘Like A Perpetual Funeral’ and building up the tension before they kicked in their latest track of the evening. Their  epos ‘Symphoniare Infernus Et Spera Empyrium’ was truly the highlight of the entire evening. Truly a great band that showed themselves at the peak of their career. I wouldn’t be surprised if they headlined Roadburn next year.