BLIKSEM - A quick checkup before they play Paaspop 2014
Win a ticket to see the band play at Paaspop this Sunday by clicking here!

Please introduce yourself to our readers.

We are BLIKSEM. We come from Antwerp, Belgium. We play metal. We do not fuck around. We have two guitarists, one bass player and one drummer. We have a female lead singer, and yet she has got balls. We released an EP and an LP, the latter titled "Face the Evil". We are currently working on material for the next LP. 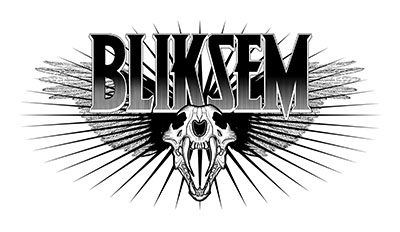 Next week you will be playing at Paaspop in Schijndel, which is known, as the festival season opener. What do you expect of the show there and more important what can the people there expect?

We expect that we will be tight as fuck. Okay, seriously now: we've played at Paaspop two years ago, so we do know the festival. Last time we played at Friday evening,it was really good. Now we play on Sunday at noon, quite a difference. But we always try to be as good as possible, and give ourselves completely, no matter when or where we play. So actually...yes, we do expect we will be tight as fuck! We'll be giving a good show, that's what we expect and therefore what the crowd can expect.
Have you got any recommendations for people to see at the festival, next to Bliksem of course?

I know that DeWolff is playing at the same day as we are, I'm definitely going to check them out. Saturday evening looks pretty damn good: Triggerfinger, Peter Pan Speedrock and The Prodigy!  If I was going, I wouldn't miss it! But since we're opening on Sunsday, I'm not taking the risk.
Bliksem is a name that stand out in the crowd immediately, for us Dutch it’s a common word, but it’s not something that other countries are familiar with. Why the choice of a Dutch word instead of the “normal” English words? Have you gotten reactions from people from other countries on the band name?

We didn't choose the name because it's a Dutch word, but because we think it's a very cool name. I mean: "BLIKSEM"! It sounds awesome. It kind of sounds like lightning. And it seems everyone can pronounce it. We've had a lot of positive reactions to that name, and only a few negative ones - and the negative ones always came from Dutch speaking people.
Oh yeah: we found out quite recently that, in Afrikaans, "to bliksem" means to beat up someone. And if someone is "a real bliksem" it means he's a bad motherfucker, haha! This name just keeps getting cooler.
j6ylgFc4h9o
We have seen you perform in Duycker a small venue in Hoofddorp, you played there for just a few people and the audience could be described as boring (which changed during the set, because of the energy you brought). How do you deal with these kinds of situations, I can imagine that it can be quite disappointing?

It's a test. As a band, you're there to entertain the audience, no matter how small. It's easy to play in front of a full house with a cheering crowd, but to play for ten people who would rather be somewhere else is a real challenge. So you deal with it by acting like we're playing for a thousand crazy fans. That's not easy, but it's the only thing that works. You want them to become a thousand crazy fans, so you treat them that way.
Your music can be described as Thrash metal, but it has quite some influences outside of this genre. It’s not a carbon copy, a song as Circus Schizophrenia is a prime of example of this. What are your and the band their influences and how do they show in your music?
Well, not one of us is a typical die-hard eighties style thrasher. It was never said out loud that we were going to start a thrash band. Originally, we were going to be a kind of metal band, with a lot of stoner influences, but it just turned out a lot thrashier than expected. We're all into different things. Seventies rock, doom, stoner, prog, jazz...you name it, and at least someone in the band will like it. I guess we all try to make the music we want to hear, and since we're all involved in the writing process, we have to find a common ground - if one person really hates free jazz, he will probably not allow a free jazz passage in that mid-tempo thrash song, you know? So thrash was the main common ground, but we will always incorporate other elements, because: if we'd only play straightforward thrash, we'd get bored - simple as that.
What are the highlights with the band up until now? What are things that you’re looking forward to?

Playing at Graspop Metal Meeting was definitely a highlight. The place was so fucking big, and the crowd was amazing. Also, we definitely improved our performance during our Spanish tour in November, and at Speedfest we just might have played our best show so far, I'll never forget that one. Right now, we're writing for the new album, and we're looking forward to finishing it - and finally playing those songs live.  And because we're working on the album, we're not playing  a lot of shows - it's almost been two months, so we're really looking forward to playing at Paaspop!
Belgium and The Netherlands don’t have a really active thrash scene. Hardcore i.e. has been very big in Belgium and in The Netherland death metal has a firm grip on the metal scene. Thrash bands are rare. Have you any idea why this is and do you see any thrash bands in the Dutch/Belgium scene that could rise from anonymity?

Well, first of all: at the moment, I'm pretty sure that thrash metal is a lot more popular in Belgium than hardcore is. There's mullets, leather jackets and spikes pretty much everywhere you look, worn by fifteen to twenty-five year olds. There's not much happening in hardcore, as far as I know, this all developed into sludge and post-metal. But that 's how it goes. Subcultures never die, but they seem to disappear temporarily and pop up again after ten years. One Belgian speed metalband is already rising from anonymity: Evil Invaders! Check em out, they're awesome live.
But secondly: we don't really emerge from a scene, and don't want to depend on one. There's more to music than scenes. For me, the word "scene" is closely linked to genre-defining, to being "true" and such...and we're not really interested in that. Albums that stand the test of time are rarely well received by an existing scene. It's about making good music, man.
What can we expect in the next three years from Bliksem?

At least one new album, and that's as much future I can predict!
Rob Martin - drums, backing vox
Details Written on 2014-04-15
Writer @Buzzin Hornet