Swallow The Sun - New Moon
The first time I heard about the Finish doom/death metal band Swallow The Sun was in 2007 when they released their third full-length album Hope. A great record that still often makes its way to my stereo. I missed out their last EP Plague Of Butterflies, but when I heard about an European tour I definitely had to go. Unfortunately their live performance wasn’t that great at all, so I didn’t have real high expectations for their new record New Moon. Luckily they totally proved me wrong on this one!
After three albums the general opinion about Swallow The Sun was that they were walking a dead end road. Progression would be hard or even impossible. Whether or not it has something to do with the line-up change, (Kai Hahto (Wintersun) is the new man on drums), they succeeded in reinventing their own sound. Right from the start with ‘These Woods Breathe Evil’ you’ll notice the distinctive Swallow The Sun-sound, but there’s more. The biggest change is the tempo. ‘These Woods Breathe Evil’ is way more up-tempo (less slow) than older songs. The band has been evolving in the direction of melodic death metal and this opens new doors, while old ones not necessarily have to be closed.
Besides the more melo death approach, also the voice of singer Mikko Kotamäki has improved a lot. Both his grunts as his clean voice sound more powerful and moving at the same time. The times Kotamäki uses his grunts and clean voices are furthermore perfectly balanced and the addition of singer Aleah (That Witch Remains, Trees Of Eternity) is a beautiful one during ‘Lights On The Lake (Horror Pt. III)’. This song switches from a sensitive ballad into a death/black metal song and back. This track and the almost 9 minutes long, intriguing ‘Weight Of The Dead’ are the best proof Swallow The Sun’s band members are masters in songwriting and don’t avoid experiments.
Hopefully they will keep evolving and experimenting, cause New Moon shows us that doom has edges that still are undiscovered. Too bad I’ve only discovered this record now, ‘cause it would definitely have made its way to my 2009 year list.
P.S. It has nothing to do with sparkling vampires! Thank God! 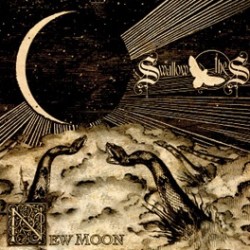