Six Reasons to Kill - We Are Ghosts
Six Reasons To Kill debuted from Germany the better part of 12 years go. Five albums later, they are masters of metalcore arrangements and pack a hell of a punch. Their fusion of metal styles places them a cut above most underground metal bands. They dominate with powerful riffs, well calculated blast beats, great aesthetics, and throat ripping vocals. They don't give a fuck and pull no punches on We Are Ghosts. Much to our advantage, it's fucking good music.

You can tell Six Reasons To Kill put in a lot of time constructing these songs. This album is built upon excellent (and varied) arrangement of blast beats, breakdowns, background accompaniment, tempo manipulation, lyrical elements, and (of course) powerful riffs. These calculated components glue together the death, black, and hardcore influences of the band. Both melodies and riffs are laid out perfectly, transitioning in and out of a variety of patterns with blistering precision. As they shred your ears, songs will often slow down, intensify and then pick up speed again, leaving behind a path of utter decimation... Fucking love it.

“Heartbreaker”, “The Damned”, “Inked Inside”, and the title track "We are Ghosts"  are great examples of this. “Betrayer” and “The Damned” showcase some of the best use of blast beats on the album. The riffs on “God of the Dead” feel like a great demon marching menacingly out of hell’s mouth, wielding a heavy, bloodied axe as he searches for his victims. “Heartbreaker” is an absolutely perfect (and very satisfying) fusion of black and death metal elements. It is definitely, one of the best tracks on the album. Six Reasons To Kill also injects a good amount of aesthetic accompaniment into their brutality. This adds a great visceral feel to the music. Though present on all the songs, “Unburied Again” and “The Damned” contain notable examples of piano and melodic guitar sections. All in all, this album comprises of genius musical arrangements which satisfy the thirst for good metal. The sound is face-ripping yet aesthetic and fleeting. You'll want to hear it over and over.

The vocals are near flawless. Deep, throat ripping roars intertwined with high pitch screeches and pig like shrieks. It sounds absolutely brutal as hell, but not completely incoherent or re-cycled. You’ll often get the impression that the band is going to come through your headphones and tear you to pieces. Sometimes there are random shouts from the background that could be done without, but very solid vocals overall. Lyrically, there is no optimism, there is no happy ending; only cold, hard metal truth. Themes and subject matter are dark, vivid, and executed quite well. The songs capture despondency and anger quite well. However, they are no strangers to humor and have created an entire track hailing the death of all hipsters. Thankfully, it all fits together and sounds near perfect.

In the end, Six Reasons to Kill has created an incredibly enjoyable metalcore album that deserves acclaim. We Are Ghosts is well calculated, well composed, and well executed metal music that will easily garner several subsequent plays. So should you invest your time and money in this album? Most definitely. Especially if you want a memorable, ferocious, and ear-ripping experience that will not disappoint the METAL demons within you. 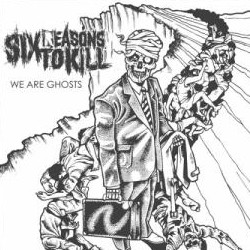 The Austrasian Goat - Principles of Disillusion