Roadburn 2014 - Adoring the riff! (Saturday)
After a more laidback day than usual, less bands playing longer sets, today it was that time again. Time to either hop from stage to stage and watch a bunch of half sets or to make some difficult choices and be more at ease during a specific show. Here are our choices. 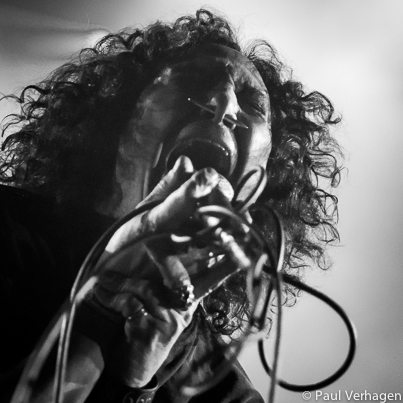 Back in the 90’s when sludge was an obscure music-genre; Noothgrush belonged to the top of that small upcoming scene. Legendary labels like Bovine, Slap-a-Ham put out loads of obscure sludge bands like Cavity, Supression, 13, Damad, but also Eyehategod, 16 and Floor belonged to the early 90’s sludge scene. Noothgrush, spawned in 1994, was definitely a band out of that scene. Luckily for us in 2011 some of the original members decided to play again, this was the first time in their existence that they played on European soil. With Dino of Dystopia fame on vocals, we knew we were good vocal-wise. This madman has been destroying stages since the mid 80’s. Unfortunately just like the Sourvein set, the sound (read volume) wasn’t there! This resulted in a weak sounding band, which really tried to do its best! Luckily after a few songs the sound got better, but still to my opinion these kind of bands would fit the Green Room or Het Patronaat better. None the less in the end of the set the sound got better and louder and made it an enjoyable finale of the set. (RM)
After seeing Noothgrush play for a couple of minutes I knew it wasn’t my cup of tea, so I decided to wait in the Green Room for Monster Truck to play. I missed them at last years’ Speedfest and was very eager to see them live. Being there early had its advantages. Although this was the third day and people were a bit more slow than on the first day of the festival the room was fully packed when this Monster Truck put the pedal to the metal. Full throttle they blasted a way through their set without running low on fuel. This Canadian southern hard rock was perfect to kickstart the day. (GG)
Some of the people told me they saw Circle play before and witnessed a crazy show. We entered the venue after the band started and heard the band changes clothes on stage before starting the show, ending up being bright colored entities on stage. That must have been quite amazing (search Youtube, you will find it). These Finish bunch of crazy geniuses play a mix of almost every genre you can think of and blend it into one chaotic mash of tunes. And they have found a energetic and fun way to perform on stage as well. A great live band with a big wink of the eye and a fuck you. Going to watch the entire show next time closer to the stage.  (TK)
After some crushing riffs of Noothgrush and Windhand, I was looking for something different. On record Gozu sounds like a Queen Of The Stone Age on steroids, but live they were absolutely a brutal steam-roller! Imagine bands like Solace, Orange Goblin on speed and The Midnight Ghost Train, then you get the idea what they sound like! With an absolute bulldozer sound, they floored everyone in the green room with loads of energy and catchy riffs. The only downside was the singer, his vocals weren’t too good. Nonetheless, the band played with such a power and energy, that you forgot the singer in an instance. (RM)
Although you could call them the house band of Roadburn, play their third edition and their fifth and sixth set, but due to circumstance I’ve never seen them live before. Due to the many glorifying stories and their great live albums I was really looking forward to see YOB live myself. And how could it be else, but they nailed it. Not a single story was exaggerated. During their first set on this edition they played their whole The Great Cessation album and it was overwhelming, beautiful, dark, intense, heavy, vulnerable and grotesque all in one. (GG)
Next up was Tribulation in Het Patronaat. Since I liked Morbus Chron’s recent album a lot, someone told me that I certainly had to check them out so I did just that. Playing a nice mix of old school death-metal, atmoshperic guitar parts and even some black-metal sounding bits Tribulation sounded like something I definitely have to check out on record. I only caught a couple of songs before it was off to Old  Man Gloom but what I heard was good. (LV)
One of the shows I was looking forward to the most and Old Man Gloom didn’t disappoint. The combined forces of Cave In, Converge and Isis at their most sludgy kept their noisy experimental side mostly from the setlist and focused on their more bludgeoning cohesive material. Solid. (LV) 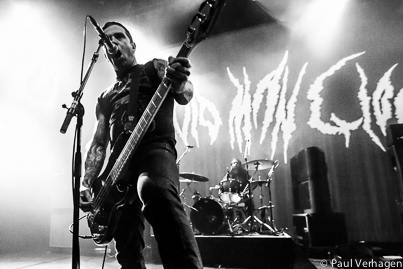 Recently discovered their album Desperate Souls Of Tortured Times and I was really impressed by their own style of traditional doom-metal. Where other traditional doom bands like Candlemass, bore the hell out of me; the Age Of Taurus struck a nerve that really got me going! After squeezing myself into the Batcave, I was luckily enough to reach the center of the stage. They took off with loads of energy and with a good sound. It was a relief to hear, that the catchy riffs are just as energetic and fun as on record. The excellent hooks and catchy sludgy doom riffs got the whole batcave banging their heads and pumping their fists in the air! Really good oldschool headbanging, beer drinking and fun show! (RM)
Skipping the final bit of Old Man Gloom to catch some atmospheric doom in a half empty Stage 01 Momentum did their best to be at their most miserable. An impressive 4 vocalist attack and a tight performance the band reminded me of Swallow The Sun or Funeral even. Good stuff. (LV)
The choice was hard, especially with everybody praising Inter Arma in my direct surroundings, but man was I relieved I choose –(16)– instead. These Americans add a hardcore vibe to their heavy sludge and the audience equally responded to it. With a couple of mosh pits in front of the stage the audience went wild and this only fueled the band to be heavier, nastier and more powerful each song onwards. During a hardcore fest Het Patronaat would be history by the end of the gig. (GG) 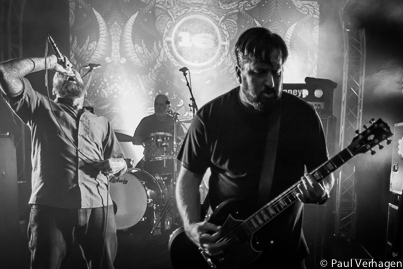 Inter Arma was the last band I’d see at this years edition was also for me one of the most anticipated. Their Sky Burial album was one of my favourites last year with their interesting blend of post, black, death and even almost Pink Floyd sounding parts. Their set was pretty much only Sky Burial material, which was performed noticeably slower than on record having a very powerful effect in this live setting. Drawn out  versions of The Survival Fires, The Long Road Home and Destroyer made me a happy man as well as the rest of the Green Room gauging the reactions at the end of each song. A worthy farewell to 2014’s edition of the festival. See you all next year! (LV)
Today I entered Stage01 about 15 minutes before The Vintage Caravan would enter the stage. Slowly the small room got packed. After hearing them the day before I was quite pleased with the energetic show they presented me with. Once again the band just played a great energetic show packed with unbelievable catchy tunes. And now we could also see there were young people playing in this band. Research online taught me that a couple of these guys just turned, or are about to turn, 20. These guys rock, hard. If you get the chance, check them out! (TK)
Before heading towards the afterparty in the foyer of the 013 with a DJ spinning classics back to back I went to see A Storm Of Light closing Het Patronaat for this edition of Roadburn. During the Afterburner they switched from 5 to 3 stages and Het Patronaat isn’t one of them. To be quite honest I could have spared me the walk. I liked their latest album Nations To Flames, but live their post-metal was a bit too indolent and standard in comparison with the acts we’ve already seen this weekend. (GG)
Click here fot the review of Roadburn 2014, day 1!

Click here fot the review of Roadburn 2014, The Afterburner!