Roadburn 2014 - Sacrifice the riff! (The Aftermath)
Some find it an ugly stripped version of the real festival for the “Roadburn tourists”, but personally The Afterburner is just a great, mellower way, to make the reintegration into the normal society a bit easier. And of course a great chance to see some great or at least impressive performances.

SUNDAY
Talking about impressive, this day started with Selim Lemouchi’s Enemies playing Earth Water Spirit Water Fire as a tribute to Selim Lemouchi (The Devil’s Blood) who passed away just a little bit over a month prior to this festival. Still mourning for him, his enemies (friends/relatives) decided not to cancel the gig, but to play it as an homage. With 11 musicians, including his sister and former The Devil’s Blood singer Faride, and images of Selim projected on the screen behind them this was definitely the most intense show of the festival. The occult rock and the story behind it kicked in hard. The whole show gave me shivers down my spine. Others walked away with watery eyes. I at least really needed a moment to let this settle. Wow. (GG)

Bölzer is probably one of the most talked about bands from last year! Their EP Aura struck in like lightning and appeared on many year lists and with good reason! I was luckily enough to have witnessed some shows of them before and those experiences were absolutely mind-blowing. Of those previous high standard shows, I was sure not to miss this show on Roadburn. The show seemed to be possessed! Due to several malfunctions of equipment, they already started the set too late. During the show more mishaps occurred. This all didn’t help the vibe, Bölzer so hardly needs. The setlist contained also a lot of new songs, which no one knew at that point. Luckily the Aura tunes were played as well and that hit the audience like lightning! Nonetheless, probably due to the high standard shows I’ve seen before this wasn’t the show I expected. Still a blistering, brutal, loud and powerful show, but really I’ve seen shows of this two-piece that literally melted my face off! Can’t wait to see them again... (RM)

After a short period of hanging around Weirdo Canyon for a drink and something to eat it was time for the second YOB gig of the weekend. Their first show was amazing and their second was also one with high standards. This time they played 3 out of 4 songs from their upcoming new album plus some oldies. Every new song had something that made me curious for the new record, so that’s a good thing and when ending the set with ‘Quantum Mystic’ you can’t do anything wrong. Not as great as their first show, but definitely finger licking good. (GG) 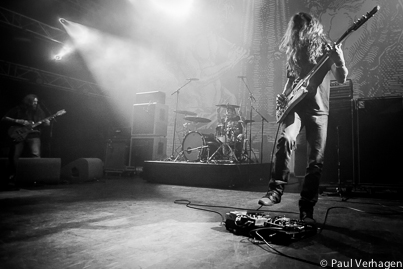 Personally I’m no real fan of Tom G. Warrior or his (former) bands, but still I was curious what he was about to give the Roadburn audience this time. His first show with Triptykon was a couple of years ago, also at Roadburn, and today he launched Triptykon’s second album at this festival. This being a show in support of the new album I expected many new songs, but we were also treated upon several oldies. Besides some Celtic Frost ones we even got Hellhammer’s ‘Messiah’. Still no fan, but I must confess it was a good show. (GG)
I decided to skip Triptykon in it’s entirely, to be on time to get into the Green Room to see the jamming hippies of Harsh Toke. Boy, was this something else! Earthless is already on the highest level of jamming stoner, but Harsh Toke stand right beside them! From the very first repeating stoner-riff that went on for about two minutes, it was one freak-o-rama concerning guitar-players dueling with each other on solos and just freaking out! On top of that you had a bass-player, playing the catchiest bass-loops and a drummer stoned out of his mind drumming like a madman! Halfway the set, the whole band shared a huge blunt of weed and rocked out like a hurricane after that. The best thing of the band was to see 4 people enjoying themselves so much and constantly dueling each other to the max to explore the jams! The sheer fun that oozed of stage, worked electrifying on the crowd. Especially the last song, that took about 25 minutes with one basic bass-loop and two guitar-players going absolutely mental on their instruments, was brilliant! Band and crowd, literally set the Green Room on fire for about 60 minutes. Absolutely insane… (RM)
Last band of the festival for us was Morne. And while I was tired and numb I definitely wanted to see (a part) of this show. In the first couple of years of this band they were really looking for a distinct sound, but with their third and latest album Shadows they seemed to find a sort of doom that fits them with now and then a small crusty detour. Sitting on the stairs in front of the main stage this was the perfect background music. Perfect, as said, but when realizing it was just background music for us at that moment we decided to leave and say goodbye to this beautiful home away from home.
The best afterparty of Roadburn is getting home writing this and reliving all the good moments though. This is all backed up by the brilliant records bought! Actually, writing this is a pain in the ass; every few minutes I’m getting up to bang my head and raise my fists and relive all these amazing shows. Not many things are certain in life, but what’s definitely certain is that the one year wait will be a hell of a long time… See you all next year at planet Roadburn!
Click here fot the review of Roadburn 2014, day 1!