Roadburn 2015 - The review (thursday)
Started as a spin-off from the Roadburn.com website, the Roadburn festival has become (at least) Europe’s leading festival for underground music that pushes the boundaries of music further and further. This festival gives bands from psychedelic, avant-garde, stoner, doom and any other related genre a stage to excel. The festival has become bigger and bigger through the years thanks to a devoted team with Walter Hoeijmakers as Mr. Roadburn himself. This year they celebrated their 20th anniversary and just as at previous editions, Metalrage was present with Maurice van der Heijden (MvdH), Lennart Verhoeff (LV) and Gerard Gilles (GG) to review this unique 4-day event. Even if we had another writer present it would be a pain in the ass to cover all the bands that play on Roadburn. Our selection of bands can therefore totally differ from other Roadburners, but the fact remains that the vibe, the music, the people, the venues, everything is top class and it remains year after year an extraordinary experience.
All pictures by Paul Verhagen (Achrome Moments) - http://www.achromemoments.nl/ / https://www.facebook.com/AchromeMoments
THURSDAY
Starting off in a subtle way before all the heaviness will torture your ears can be established easily with the Viking Post-rockers Solstafir from Iceland. They do an instrumental soundtrack for the Viking movie Hrafninn Flýgur (When the Raven Flies). The movie is taking place at the shores of Ireland and starts off pretty brutal with knife fights of Vikings against the local population so the movie is not the easiest start of the festival. Bad thing is you cannot read the under titles well so I led the movie go for what it is and let myself drench in the fuzzy and dreamy tones of Solstafir. 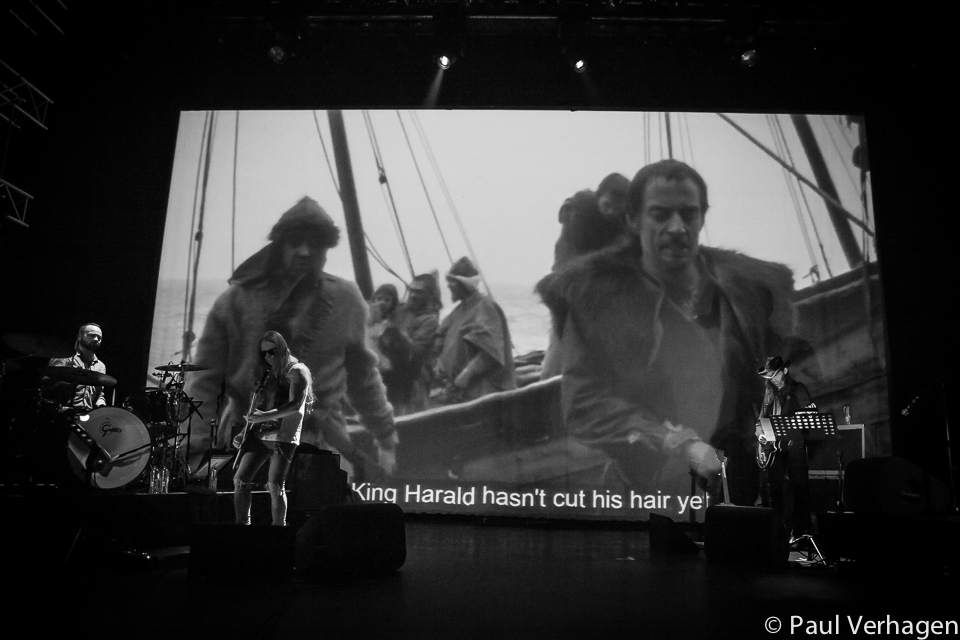 The band is using parts of their last album Otta and combines it with new written tunes. No vocals are used and this is the most interesting part if you are familiar with the Solstafir work. In your head you still hear the Icelandic vocal lines but the songs bring a different voyage. The movie last for almost two hours so people need to be patience. After half an hour the music swells towards a climax if a geyser boils and an outburst of hot water is waking you up. This is happening more often later in the set and I also have to mention the banjo sound in the middle of the soundtrack that could’ve been Solstafir covering Woven Hand. (MvdH) 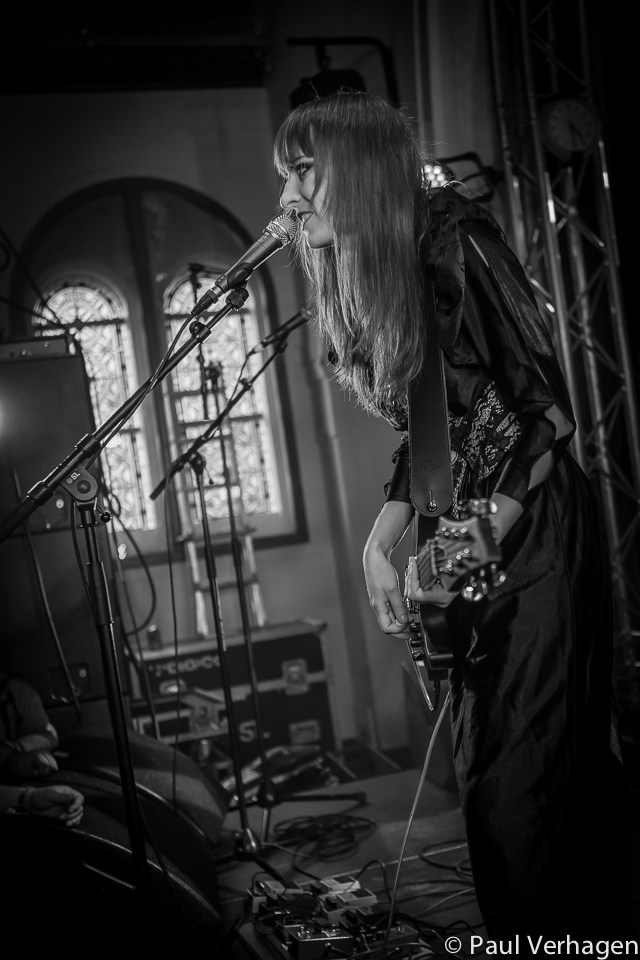 My Roadburn Thursday ended with the realization that I've seen a lot of three-pieces that day (and would see during the rest of the festival) but more importantly: the festival is almost becoming a poster boy for gender equality. The amount of bands with female members was kind of astounding. It should not matter but it was something that stood out to me and I consider it a good thing. The first thing I saw in Het Patronaat that day was SubRosa. After waiting in line for a bit I entered a packed venue which was treated to the massive wall sound of ‘Borrowed Time, Borrowed Eyes’ (one of my favorites) where a violin cut through every now and then. From what I've heard, the set was a mix of both their last records and as much as location goes, the church was a perfect setting for the music creating an ample space for the riffs to properly bellow. (LV)

After that it was time to find a space at the Cul de Sac to catch a glimpse of Marriages. The Emma Ruth Rundle fronted shoegaze post-rock trio just released a new record which I haven't heard yet unfortunately, but their Kitsune EP was enough to warrant a look and I wasn't disappointed. First thing that stands out are Emma's powerful vocals. They have a slight “country” vibe to them and coupled with the Red Sparowes-esque music (which they share members with) it makes for an interesting and engrossing mix which works very well. The new material they're playing seems to have a bit more hooks (and some more 80s vibes) than Kitsune, so I'll be checking out the album soon for sure. (LV) 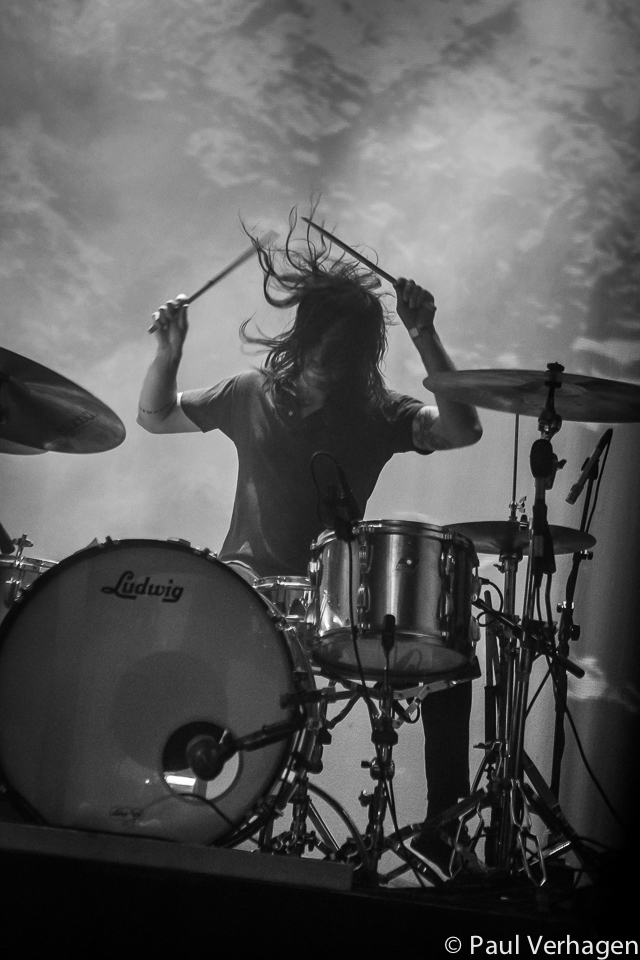 First band of the day that really caught me was Chicago’s instrumental trio Russian Circles. They already impressed me with their studio albums, but live they’re able to create a really intense atmosphere in which they’re tons heavier than when listening to their records. They have these great build ups in their songs prior to a magnificent eruption of noise. Their set consisted of songs from all their recordings, before ending with the impressive ‘Mlàdek’ of my personal favorite record, Empros. Before I had high expectations and was really looking forward to this one, but they were even better than I could have wished for. (GG)

The Russian Circles overlap with Thou is a though one. Starting in the main hall with the Circles brothers and then decide when to leave for Thou is not easy. I did and when finally entering the Patronaat 45 minutes are left of sickening doom and vocals in a full venue where the sound is shaking your stomach and ears. Standing on the balcony hell is coming home with the four small maniacs from Louisiana. Even so far away from the stage you are sucked into the miserable and heavy songs from the classic albums like last year’s Heathen for instance. (MvdH)

Last time I saw Eyehategod (EHG) play was also in Tilburg, in 2013 in a sweaty small metal bar and they were amazing. Their crushing sludge made a big impact. Today they’re back in Tilburg, but are programmed on the biggest stage Roadburn has. With a new drummer, a new album (still featuring tragically deceased drummer Joe LaCaze) and with the NOLA documentary fresh in my mind I rushed to the main stage and was stunned once again. Whether they play in front of 200 or 2.000 people, they give it all and people love them for it. Almost all band members were having fun and singer Mike Williams was a bit agitated by someone, but this all fueled the passion they put into their songs. On Friday they’re playing a second set and I’ll definitely have to be there as well. (GG)

After seeing a string of other acts my personal highlight came at the very end with Helms Alee at Stage01. All I can say is that Walter needs to invite them back next year to play a bigger stage. The music just needs a bit more room to breathe. As for the show, it was what I hoped it to be. The signature razor-bass sound coupled with atmospheric guitars, Ben Verellen's wail on top of it all and a nice song selection made it a very nice complementary soundtrack to the buzz I had going on at the end of day 1. After catching a bit of spazz rockers Lazer/Wulf who showed that it's ok to have fun as well on stage it was time to call it a day. (LV) 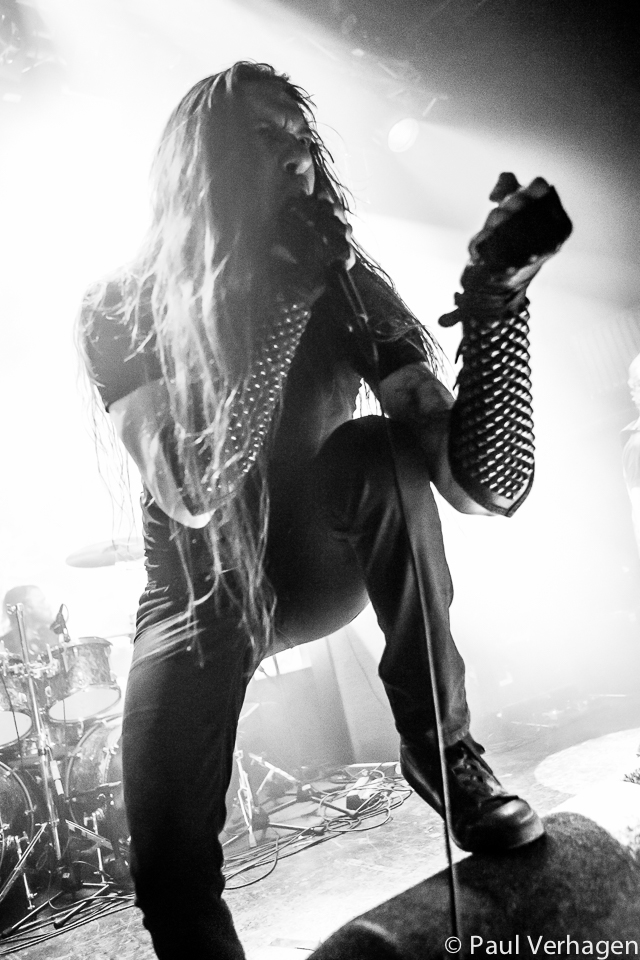 After seeing the one New Orleans band (EHG) crush the a stage in the 013 venue I decided to go back to back to the other New Orleans based band to hopefully experience something similar. In a packed Green Room Goatwhore gave away an excellent performance with the heave blackened death metal songs. A legion of devil horns were up in the sky through the entire concert and especially after dedicating a song to Selim Lemouchi (The Devil’s Blood) the band couldn’t do anything wrong anymore. Great addition for the diversity of the festival as well. (GG)

Bongripper is back on the European mainland. Without a major record label deal these instrumental and sober (they don’t do weed) Doom monsters easily bond the complete main hall together and keep the entire crowd in an entire stranglehold during the complete session of the album Miserable. They are at best to start off a song (three songs are played in an hour) with a monstrous riff, drench it in the perfect doom guitar sound and keep on playing and playing until everyone is mangled and suffocated in the heaviest doom you can imagine. With or without feedback breaks the band continues their repeating process to those who finally feel the catharsis that’s coming. One fast explosion at the end in the lava dripping process is all you get but that is enough for those who can wait for it.

Great is also the slow moving backdrop of the last album. The album cover is one big disgusting mouth and slowly the teeth are opened until we see the gaping wound of the mouth. There is no band on this entire planet that plays this monotonous Doom in such an accurate way they can get away with no vocals for an hour. The hour is over before you noticed and the same enlightened feeling coming out of pain and suffering was just done by Bongripper. The best band at the best spot of festival day one for sure. (MvdH)