Roadburn 2015 - Looking forward, but treasuring the memorable moments (Saturday)
During the Saturday, the third day, of the Roadburn Festival I heard the festival sold out during the event. In previous years this happened a lot earlier, but it doesn’t really matter when this happens. A sold out Roadburn means faith in the organization and the appreciation they deserve for their incredible effort they put into this fest every single year. And as the organization says themselves: “It gives us the drive to raise the bar even higher for the 2016 edition”. We’re already really looking forward to next year, but first we will treasure the great moments we had on this year’s edition. 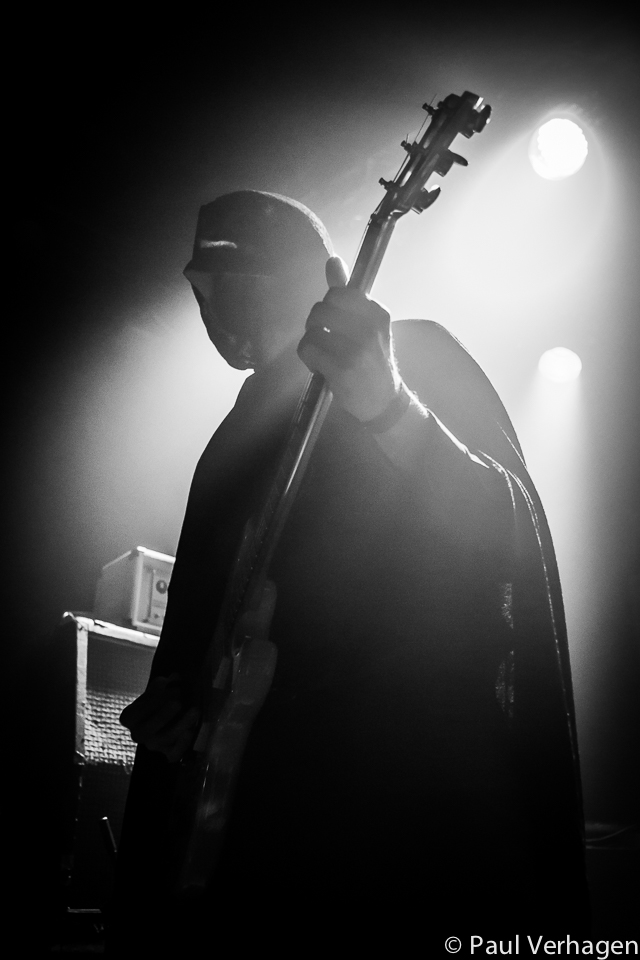 y third (and personal last) day for this year started in the Green Room with Briqueville. Donning robes and masks they looked like something straight out of Kubrick's Eyes Wide Shut and the music at times had a similar weird aura around it. Playing a mostly instrumental spacey kind of doom at first, the following 25 minutes (the shortest show I've seen this year) were a build-up to a kind of Amen Ra-ish blunt monotonous outburst which left the crowd wanting more. A band to watch. (LV) 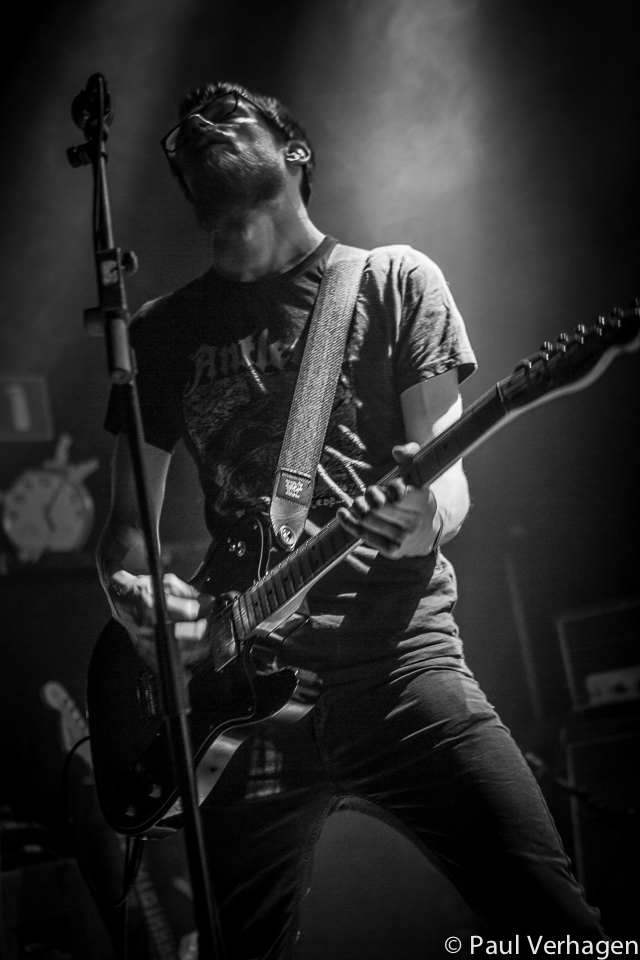 tal needs to be played by rough guys in old jeans with leather jackets; at Roadburn expect the unexpected and with Sun Worship we see three young German guys that look if they walked away from the university to play pieces of Black Metal. And how they do! With songs from their last album Elder Giants they bring the crowd in a transcendental state as Wolves in the Throne Room did a couple of years ago. The difference is that Sun Worship is much more rudimental and focuses on the razor-sharp riffs, screams and the everlasting Blast Beat that is played tight as fuck. Still with a human feeling though. After 40 minutes their set is over and the Black Metal whirlwind left everyone in ruins. (MvdH)

Something totally different is Domo. Take a couple of spacerock enthusiasts from Spain who stepped in the van and are smiling from ear to ear when they are playing at the completely packed Stage01. They are not the tightest band and especially the drums sound is pretty garage. This is not a problem at all, because it only adds up to the no-nonsense atmosphere on stage. With ongoing guitar melodies, fun and a great positive energy they take the crowd with them on their endless voyage. It’s great to see there are still bands standing up that keep the old Roadburn atmosphere rollin’. (MvdH)

Tombs were on a mission to level Het Patronaat or so it seemed. As their last appearance at the festival could mostly be summed up with very loud, today Mike Hill and his fellow band members sounded more focused and very, very tight. Musically I'm afraid I have to admit that I think Tombs peaked with their first album Winter Hours, but in a live setting that doesn't really matter. You get pummeled into submission anyway regardless which record they're pulling from. Convincing stuff. (LV) 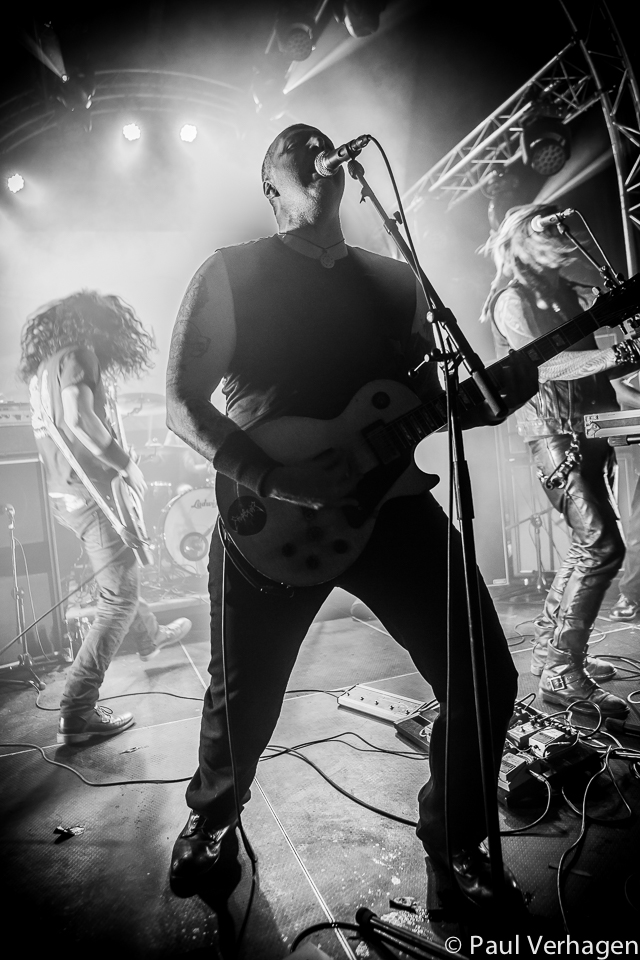 The grand finale then. If there's any band which embodies the spirit of Roadburn it should be Kayo Dot. Mostly because it has played every musical genre present on the festival in some shape or form. From the post/prog/death/black/modern classical/jazz amalgamate of their classic debut Choirs Of The Eye to the 80s psyched oud road trip songs of their recent opus Coffins On Io, musical mastermind Toby Driver has done all of it so it seems. Today the set focused on their last two albums, the earlier mentioned Coffins On Io and 2013's fan-funded record Hubardo. Mostly forgoing the completely spazzed out freejazz metal tracks the show was a master class in atmospherics, technical skill and just brilliant original music. It's hard to pigeonhole them, cause Kayo Dot manages to sound completely unique and discordant, but melodic and accessible at the same time. But of course at the end everything is allowed to spiral out of control into a maelstrom of blast-beats, synths, squealing horns and lastly a wall of noise. When it's all over I know I've seen this year's absolute highlight, and my only wish would be they'd play around 3 hours more. Epic. (LV) 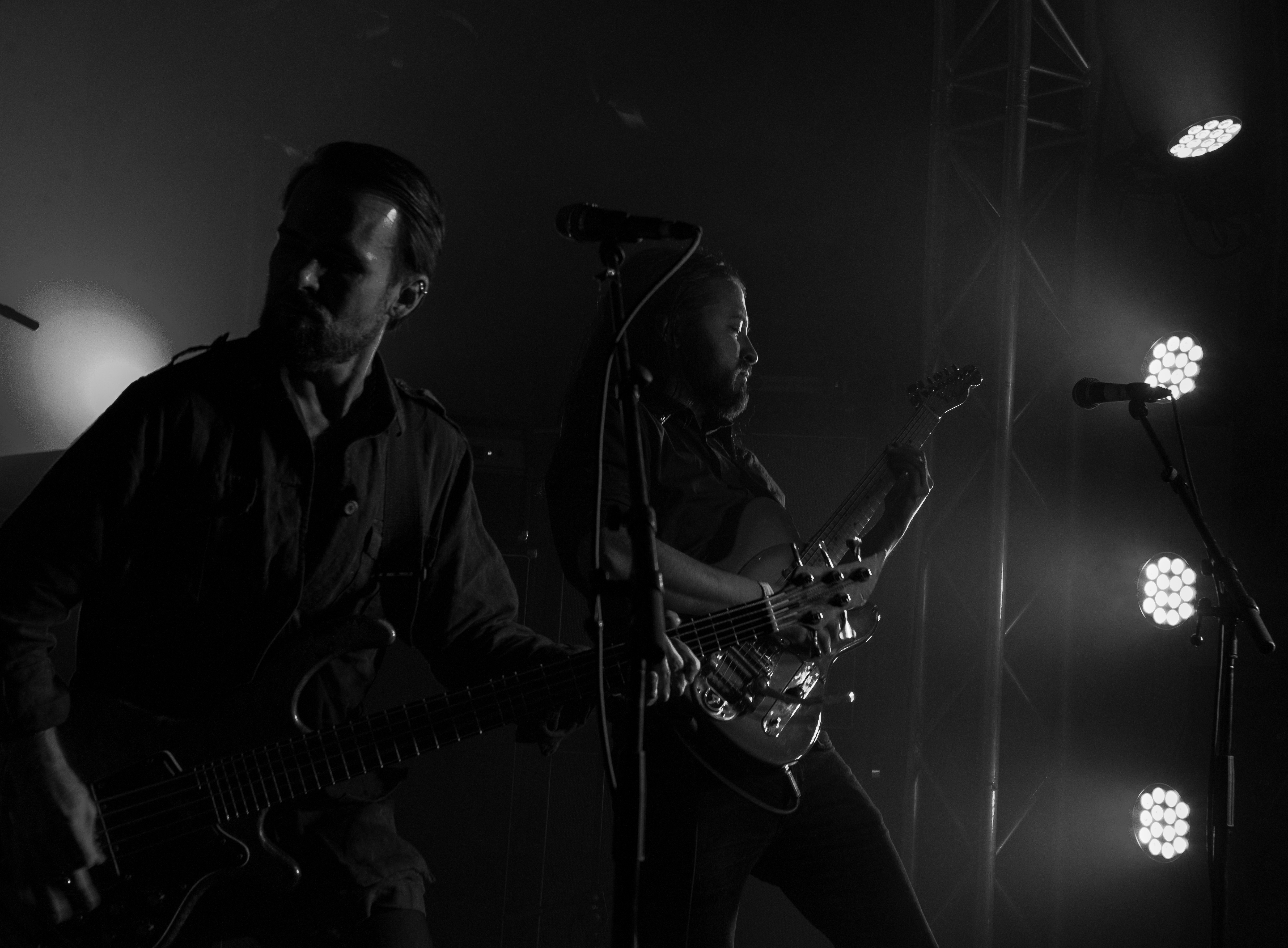 From old to new and from underground to influential to many other bands in the bill, Roadburn holds all sorts of bands and with Fields Of The Nephilim they managed to book an influential one. With Carl McCoy as their charismatic frontman these guys have played a big role in shaping the gothic subculture, but also other bands ranging from black metal to rock have been influenced by these pioneers. Today they played their second show of the festival and it was breathtaking from start to finish. They intrigued me for the full 110 minutes. One of the bands I was looking forward to in advance and they just delivered. (GG)

From outer space is the headliner at the main stage. 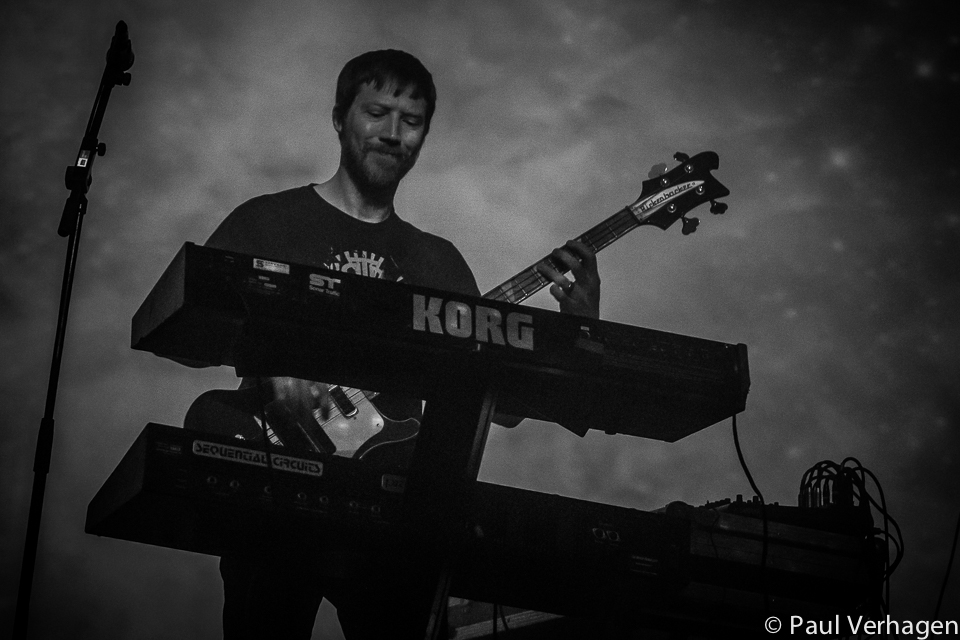 The drum/synth duo Zombi perfectly fit in the new path Roadburn has taken the last five years. Under the banner of avant-garde and proggy music the duo is lifting off towards other territories. The band from Relapse Records has made a slew of records that all were welcomed by those who loved the sound of Tangerine Dream, Klaus Schulze and Genesis.  In 2006 Zombi did the support for Isis on their European tour. This is their first show after that tour on the European mainland and in the meantime the cult grows and grows.

The base of the band is the repetitive drum work of A.E. Paterra, sometimes combined with the bass sound of Steve Moore. The drum patterns are the ideal starting point for Steve Moore to create spacy synthesizers loops and pulsating electronic waves. Soon a danceable mood is evolving. The band pays respect to the origins of electronic music where a genre like techno has been born out.

The songs bring memories of science fiction series and movies from the eighties at the table. The longer the set is lasting the longer the songs are. Combined with an outer space background the crowd alienates from planet Roadburn and travels with Zombi towards stars and planets in the universe. (MvdH)

Blasphemy, speed, heaviness and eardrum destroying volume; that’s what comes in mind when thinking back about the last performance in the Patronaat venue this year. If other bands before wouldn’t have done it already, Ohio sludge legends Fistula definitely desecrated this old church permanently. With a filthy performance, in a good way, they closed the stage with dignity. (GG) 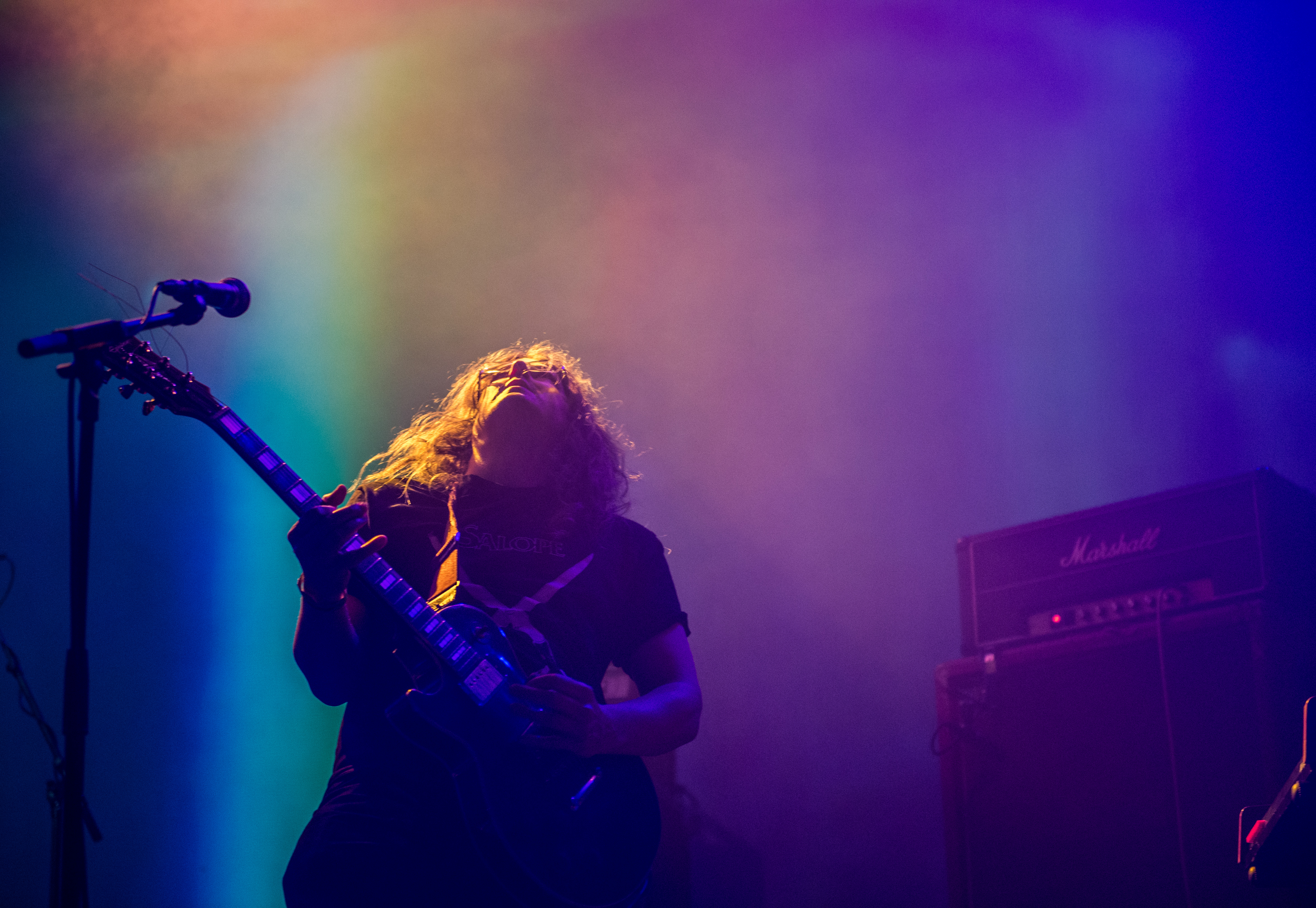