Roadburn 2015 - The Afterburner reviewed (sunday)
The Sunday of the Roadburn festival, traditional called the Afterburner, always is a special day. Some can’t get enough and want something extra after 3 intensive days of a festival, others use the Afterburner to catch a glimpse of the much celebrated Roadburn vibe and some people see this as a single event just to catch that one band they’re dying to see. This year there were a lot of people especially present for headliner Anathema, but it was also a day with a new chance to see Bongripper, to watch the horror movie Suspiria with a soundtrack played by Goblin or discover another band on one of the three stages that were being used.
Written by Maurice van der Heijden (MvdH) and Gerard Gilles (GG). Pictures by Paul Verhagen (Achrome Moments) - http://www.achromemoments.nl and Pieter Heijboer
SUNDAY 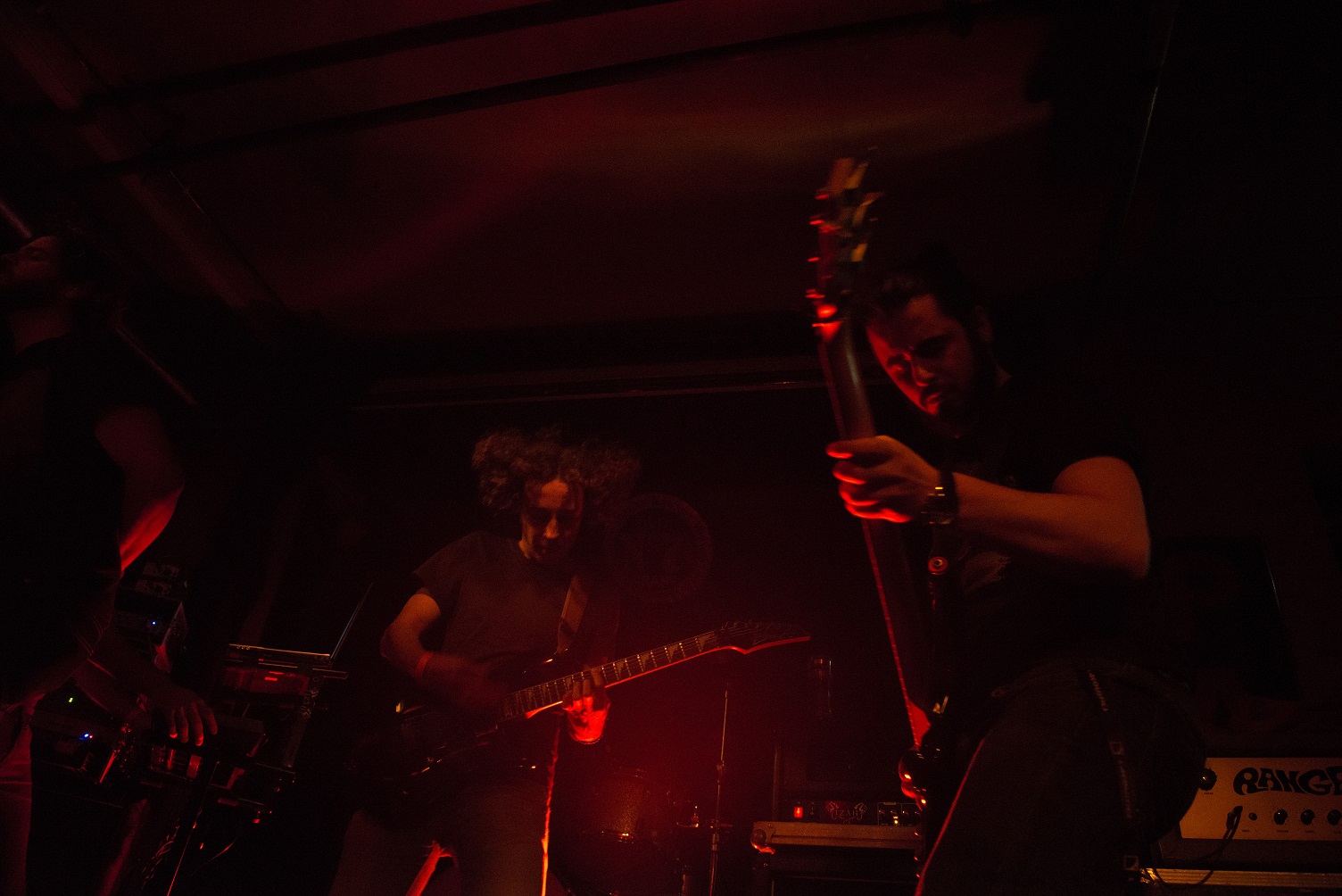 For those who still don’t have enough there is the afterburner. Kicking off in the Cul the Sac with the album release party of Tilburg’s Izah is a good decision. Finally their debut album sees the light of day; the songs on the album are already a longtime in the set list. As a follower from the early days the songs are no surprise; however with songs longer than 10 minutes it’s better to know what is coming. The band best can be described as an atmospheric Doom Metal band with hints to Post-Metal, Ambient and in the last song ‘Sistere’ a spun out Black Metal part. With not much room on the stage the six-piece is bursting out of energy although I hope the guys are not claustrophobic because they really need to be aware they don’t hit each other with their instruments. That’s the only minor; at a bigger stage the band would’ve released more anger and emotions. (MvdH) 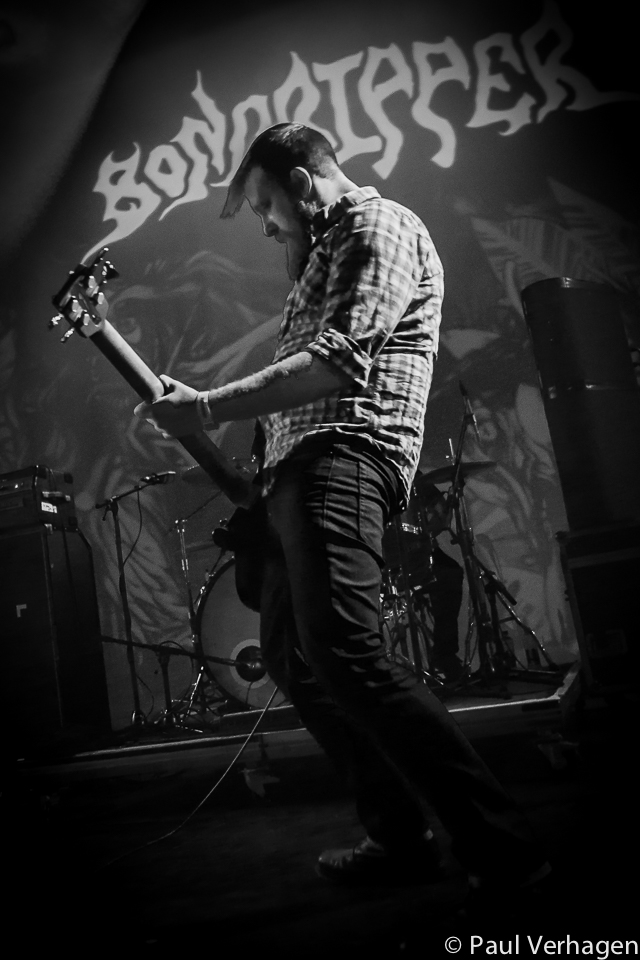 I am not going to explain the Bongripper sound again. The band is still fresh after three days and treats us with a mixture of their hits from the past. Instrumental Doom in full effect, one fast Black Metal part but they really excel in the end part. After a break, the riff they keep on playing gave me goose bumps. I am bowing deep for this band that still is capable to achieve this fine moment after the countless bands I saw this weekend and the years before. Bongripper flown over for the second time and once again reaped the complete crowd. With no big label behind them they crushed the main stage two times and at the end of the festival completely sold out all their shirts. (MvdH)
For the better part of the last 5 years Lo-Pan has been touring the world with their stoner rock. First thing you notice when seeing them play is the strange podium set-up (singer behind the drummer), but immediately after you’ll notice the chemistry in this band. With some good songs, nice riffing, powerful vocals and a serious groove Lo-Pan did a good job entertaining the crowd. Definitely made some new fans today.  (GG)
And  finally it was time for the headliner, time for a special show by an innovative band that has gone through different periods with different band members in their 25-year long existence. Many people had bought tickets especially for this special show by alternative rockers Anathema. To celebrate their beautiful career they’d come up with the concept of playing songs from all their studio albums in reverse chronological order. To spice things up a bit they even invited former members Duncan Patterson (bass, former song writer) and Darren White (original singer) to join them on stage during this short tour they called the “Resonance Tour”. 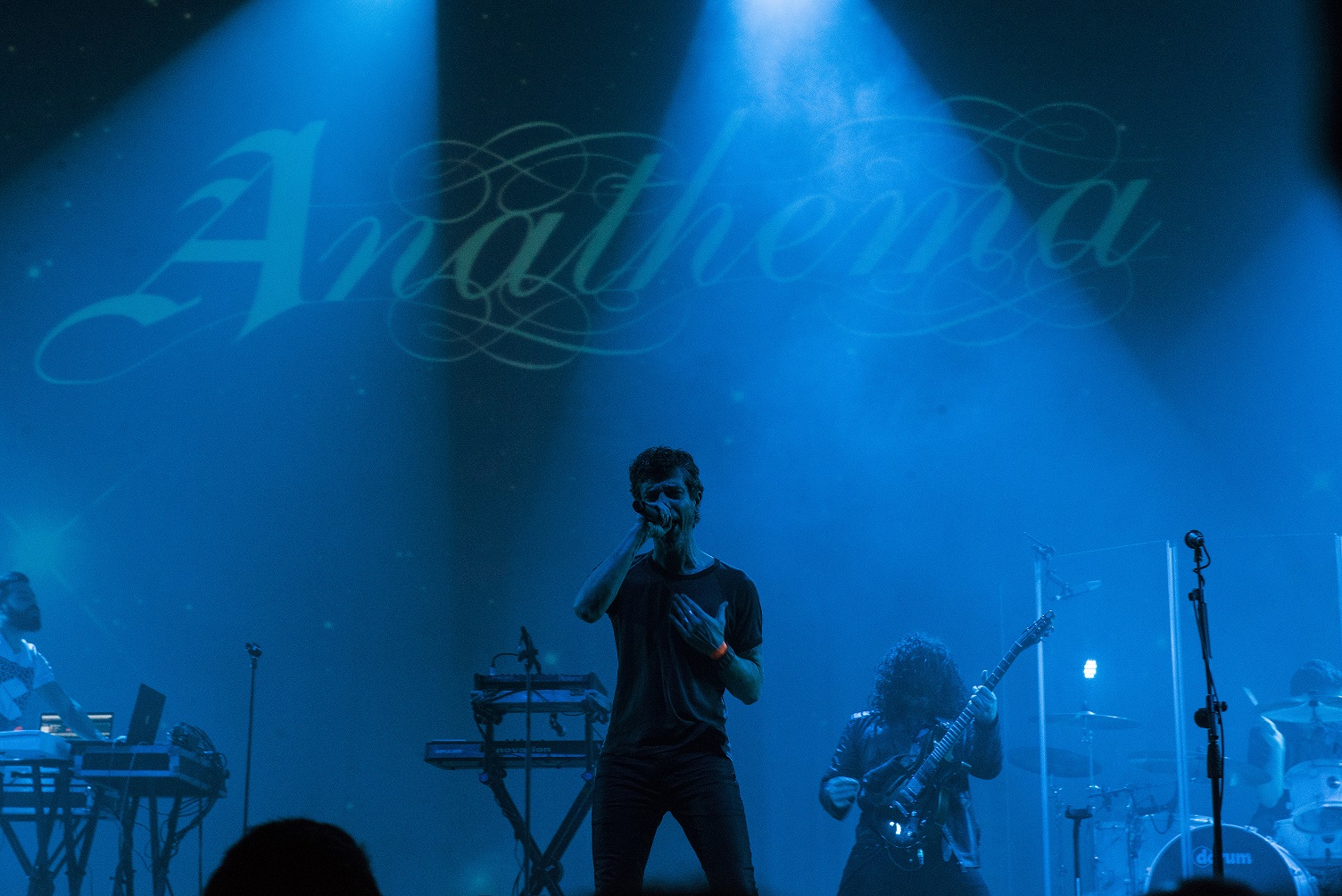 Around 20:30 the lights dimmed and Anathema kicked off with the self-titled song from their latest album Distant Satellites. By seeing bands like Bongripper and Lo-Pan it was a tough choice to start with this song, cause it was a bit too dull maybe. The current line-up of Anathema really started to impress from the fifth song onwards. Before it was a bit awkward to see some die-hard fans clapping along, while others didn’t get it at all. But from ‘Closer’ onwards you could feel the crowd was digging it and the appreciation and interaction kept on growing. After the fitting ‘On Last Goodbye’ it was time for a small break and to welcome the line-up from the 1995-1998 era. With Duncan Patterson on bass we got treated on 9 songs in total from the Alternative 4, Eternity and The Silent Enigma albums. Quality wise probably the best part of their whole show. The songs were loved by the audience, the execution was flawless and it all came to a majestic closure with the mighty ‘A Dying Wish’. Closure of the second part of the show of course, because fortunately it was far from over! 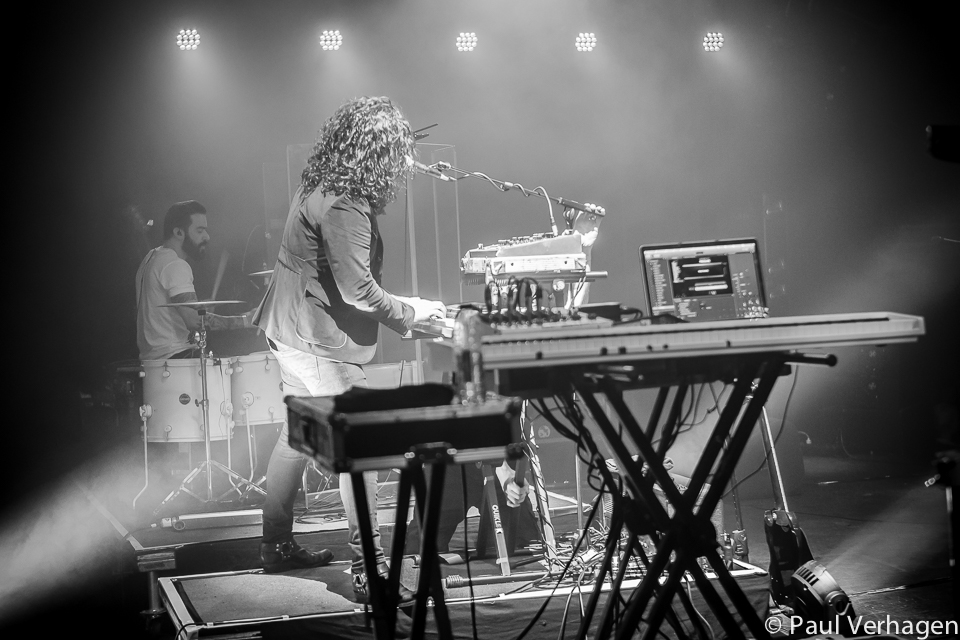 After once again a short break the band returned for a third and final set and this time they added original singer Darren White to the line-up to bring back the 1993-1995 line-up. With a couple of tracks from Pentacost III and Serenades this was by far the most impressive part. It was great to see White enjoying this chance to play with his old band mates once again and it was beautiful to see the people react on this line-up and this ode to doom music in general. After approximately 2,5 hours the encore ‘Sleepless’ faded out and people were left in awe. Truly a special performance that became better as the songs got older. (GG)
The afterburner is coming to an end. Not much people are around and the merch is almost gone. Should I stay or should I go? With a day off after Roadburn I gave The Osiris Club the benefit of the doubt. I won, because at the latest moment of the festival the band from the UK is a surprise. The band comes on stage in capes with beak masks and an old fashioned horror movie is played on the screen. Musically the band is combining creepy organ sounds with the progrock from King Crimson and early Genesis. To top it off the poppy side of Ghost also enters the room. The weird cocktail doesn’t have the best sound of the festival; still the band receives the response it deserves from the few standing. (MvdH)
With Bongripper as absolute overall winner with two crushing sets Roadburn 2015 is a winner again. When you discover every year new bands like The Osiris Club, Domo or the restyled version of Kay Dot the participation of Roadburn 2016 is an absolute no-brainer. (MvdH)