Roadburn 2013 - Thursday
Roadburn 2013 is over and what we saw was again an impressive out-of-the-planet festival with lots of intense shows, surprises and especially smaller underground bands that show you don’t have to be a classic or giant act to impress an entire crowd. Less huge main stage acts this year, Roadburn 2013 was all about discovering inspiring acts that are still at the beginning of their career. Metalrage.com participated with three maniacs: Gerard Gilles (GG), Lennart Verhoeff (LV) and Maurice van der Heijden (MvdH) to cover the most interesting shows in the 013, Patronaat and Cul de Sac. We kick-off with the first day: Thursday! 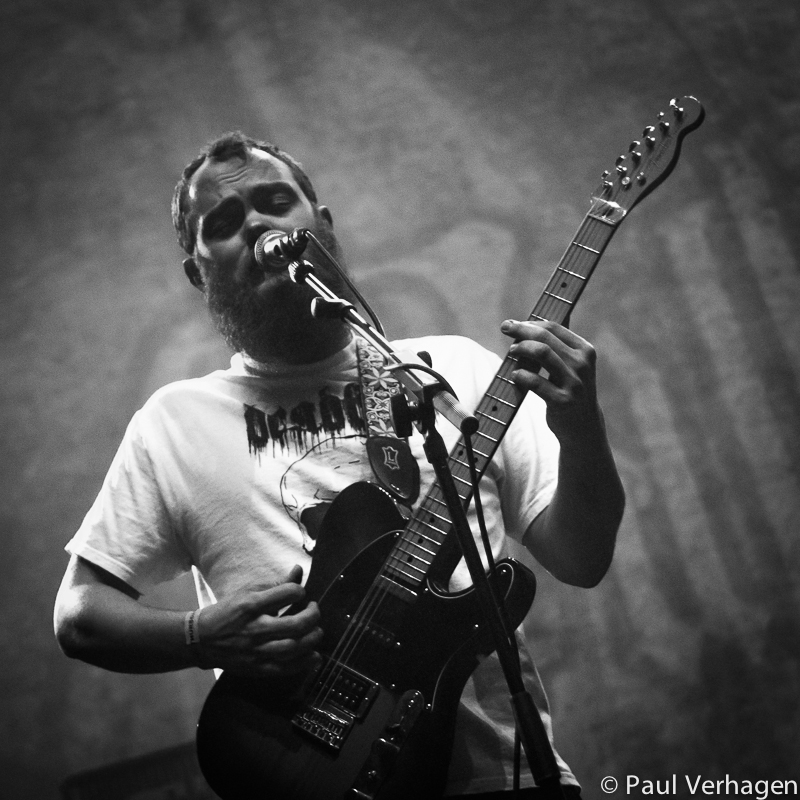 Under his own name Dirk Serries (after running the long time projects Fear Falls Burning and Vidna Obmana) opens the festival in style with his minimalistic guitar drone project Microphonics. The intensity, emotions and energy in his work is typical for a Roadburn gig; however he only needs his guitar, amps and some analog & digital effects to receive a breathless crowd. The peaceful sounds are perfect to over dream your thoughts of the last days and look forward towards heavier stuff to come in the next weekend. (MvdH)

Pallbearer is the first new star on the doom front that shows for the first time his debut Sorrow and Extinction in Europe. You’ll see the guys are nervous playing on a big stage and that means the clear voice of Brett Campbell isn’t the best thing today. The riffs are brilliant though, together with the groove. If you like it or not, Campbell is going for some rougher voice and during a live show this isn’t a problem at all. From the swamps of Arkansas you don’t expect perfectly clean music do you? (MvdH)

The Atlas Moth had just started pummelling 'Het Patronaat' with their psych-infused layered post-metal when I arrived. As I'm not too familiar with their acclaimed 'An Ache For The Distance' album it was kind of hard to really get into. The dynamics of the vocal interplay and melodic intricacies pretty much got lost in the live environment and it all started sounding same-y in the end. Still, they put up a good show and the little nod to recently deceased Chi Cheng was a welcomed gesture by the audience. (LV)

Arriving in a jam-packed 'Green Room' where the temperature already had reached boiling point on the balcony it was hard to catch a glimpse of Blues Pills but the sonic part more than made up for it. Having two ex-Radio Moscow members (one of my Roadburn favorites from a couple of years ago) in their ranks had made me extra curious. And they did not disappoint. Musically it's in the same vein, (psychedelic blues-rock) but their Swedish female vocalist is what really takes them to the next level. With a raspy voice full of soul she pretty much stole the show, much as Miny Parsonz would do later that day with Royal Thunder. Good stuff. (LV)

I was lucky enough to catch a few tunes from the French duo Crown. Just as Godflesh they have a drum computer but they decided to combine it with Doom and Post Metal Riffs including heavy screams. The riffs feel like eruptions and through the screams you really feel the pain of these guys. They just released their first proper album and deserve the support of those into heaviness. (MvdH)

After a short and quick walk to the Patronaat the men and lady of Royal Thunder are playing a soulful (check the vocals of Mlny Parsonz) and dirty rock and roll set as powerful as Led Zeppelin or Black Sabbath in their high days. Besides the energy and song writing skills of the band the diverse voice is immense. Screaming like a maniac together with the powerful long clean vocal parts. With a perfect sound this show is one of the highlights from a newcomer at the Roadburn front. (MvdH) 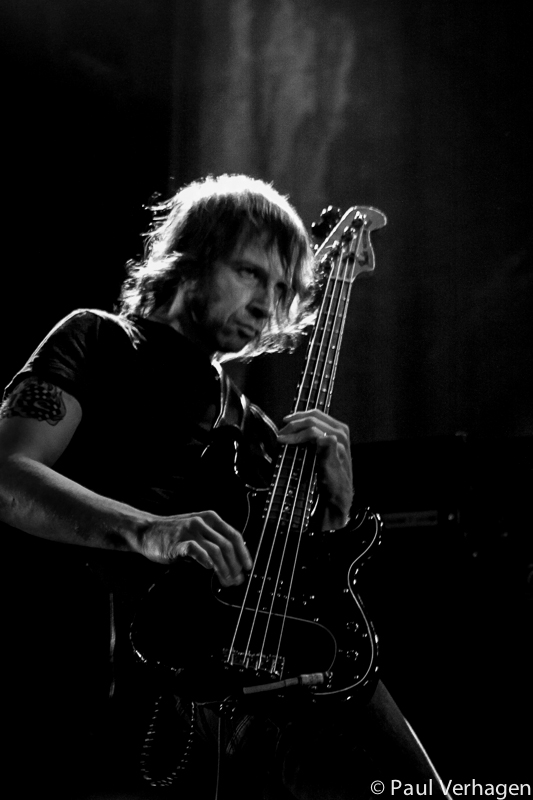 In 2010 this festival started a tradition by asking a single band or performer to do a couple of different shows during the whole weekend. That first year we saw Enslaved in 4 different settings and Circle and Justin K Broadrick continued this tradition in 2011 and 2012. This edition France’s black metal / shoegaze artist Neige had the honor. Most famous for his work in Alcest he also took Lantlôs and Les Discrets with him to Tilburg of which Lantlôs was the first of them to hit the stage. Of the three earlier mentioned bands Lantlôs was the band I was least familiar with, but man did they hand over their business card in style. With a both furious and beautiful performance they delivered their “blackgaze” with style. The sounds wasn’t that good, especially during the first couple of songs, but in the end they ravished their audience with an oppressive and susceptible set. (GG)

With more and more booze and drugs everyone is prepared for the trio of High on Fire. They play the entire debut The Art of Self Defense and are kicking your arse with the rough power strokes and solos on guitar together with the thundering drums and bass parts. It’s not their best show but they deliver in front of completely full main venue; this is rock n’ roll in optima Roadburn conditions. What else can you say except that Matt Pike’s belly is becoming as fat as the loudness of the songs and the power of the riffs? (MvdH)

With so many bands on the roster it’s sometimes hard to choose between gigs. This time I was in doubt about the John Baizley / Nate Hall / Katie Jones combination or the instrumental rockers Maserati. With the first combination also playing on Record Store Day in the local record store Sounds the day after I decided to watch the American spacerockers. With the focus on the last two records they did a great job entertaining me with their great instrumental anthems, but I do have one problem with them playing live. They just can’t match the amazing quality of their studio work and this was confirmed when the guitarist had issues with his equipment. For minutes we only heard the bass and drums. This did result in a minor disappointment for me, but during the other 55 minutes of the gig they did almost achieve the perfect quality I wouldn’t have dared to dream of. (GG)

As much as I love Primordial, their show (or what I saw of it) was kind of a letdown to me. Alan Averill's performance was impeccable as always, commanding the stage and reciting his Irish 'history lessons' in his usual fiery manner.The rest of the band seemed 2 or 3 steps behind him all the time though.. Even a personal favourite of mine like 'The Gathering Wilderness' sounded sloppy and powerless, not doing the album version justice at all. Knowing what they're capable of in a live situation it was time to say: Better luck next time, and off to Intronaut. (LV)

Did we already say Roadburn delivers quality music each day, in every genre?! With Intronaut on stage in Patronaat the festival proved itself again. It has to be said, the vocals aren’t for everyone, but especially instrumentally these guys rocked hard. Their psychedelic post-metal was perfectly in place in this old catholic boy school with its leaded lights. In just one hour these guys took the listener on a trip through jazz, death metal, progrock, stoner and some psychedelic melodies. Thinking back I still see myself wandering through their musical soundscapes and just going with their intense flow of different styles, rhythms and harmonies. Never felt better with losing total control over my own mind. (GG)


Closing the smallest stage of this festival for the first time this weekend was entrusted to the stoner/blues rockers of The Motherfucking Midnight Motherfucking Ghost Train, as these three guys from Topeka, Kansas themselves like to call their band. Known for their passionate performances and one of the best stoner records of last year, Buffalo, I was really looking forward to see them in action. Entering the stage one by one they truly build up the momentum and when this train departed there was nothing that could stand in their way. With a furious and sometimes even funny set they steamed through their songs in a very fast, dirty and especially loud way. Singer/guitarist Steve Moss wasn’t uncomfortable with some serious overacting in between, but furthermore they truly lived up to their reputation. (GG) 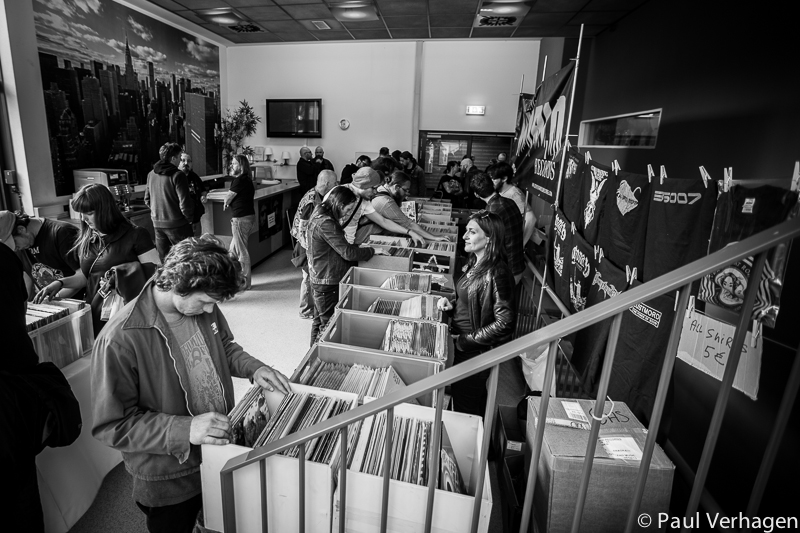 Herder is Harder? Yes, especially bass player Blitzer is killing you with his awesome stage performance. For the rest Herder is about the heavy riffs from riffmeister JB. With old Born From Pain singer Che they are in the perfect shape to fuck up every drunk idiot in the Green Room. Even a mosh pit was started. They´re obviously not the best band of the day, the song material is not that special but they are perfect to close off the day in a true rock and roll way. The only thing what everyone wants at this time is rolling riffs and a band that carries the energy in full effect over the crowd. (MvdH)

Click here fot the review of Roadburn 2013, The Afterburner!