Roadburn 2013 - Friday
After a good first day and way too little sleep I woke up with the tunes of the just released new Black Sabbath track ‘God Is Dead’. From that moment on I was really in the mood for some good and dirty old-fashioned hardrock. Luckily for me Kadavar was one of the first bands to play today. With their mix of prog rock and stoner and with some psychedelic elements the references between them and Black Sabbath and Led Zeppelin were easily made. Sure not everything was original, but besides a nice trip down memory lane they showcased their great skills, enthusiasm and devotion to the music. I’m sure we’ll be hearing more and more of them in the near future. Their star is definitely rising fast. (GG) 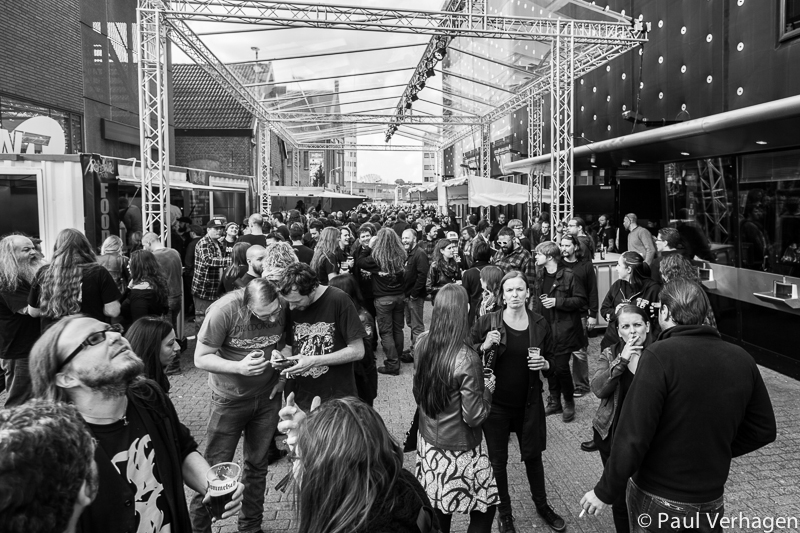 For me it started a bit slow on the Friday but with a lot good stuff to come I loved this calm beginning. I started with the good and evil procession of Sabbath Assembly that felt calm, occult and relaxing. Maybe a bit too relaxed, as also the words that were read up for this ceremony by a guy/girl (still not sure what it was) wearing a periwig. It couldn’t hold the attention for the full set but as starting point it was OK for the Friday. (MvdH)
Besides bands in the standard venues like the 013 and the Patronaat, Roadburn is also exploring its possibilities in the city itself. One of these possibilities is the Cul de Sac bar just around the corner of the 013. They already hosted the Roadburn Hardrock Hideout (the pre-party on Wednesday) with Attic and Bliksem and on Friday and Saturday they welcomed three bands per day to watch for free. One of these bands on the Friday was the Dutch spacerock outfit Radar Men From The Moon. All the way from Eindhoven (just 35km east of Tilburg) these three gents brought us some nice spacey instrumental rock. The room was packed, their performance flawless and the vibe great. With this performance coincided was the release of their first full-length album Echo Forever and after seeing them play that one is worth a recommendation. (GG) 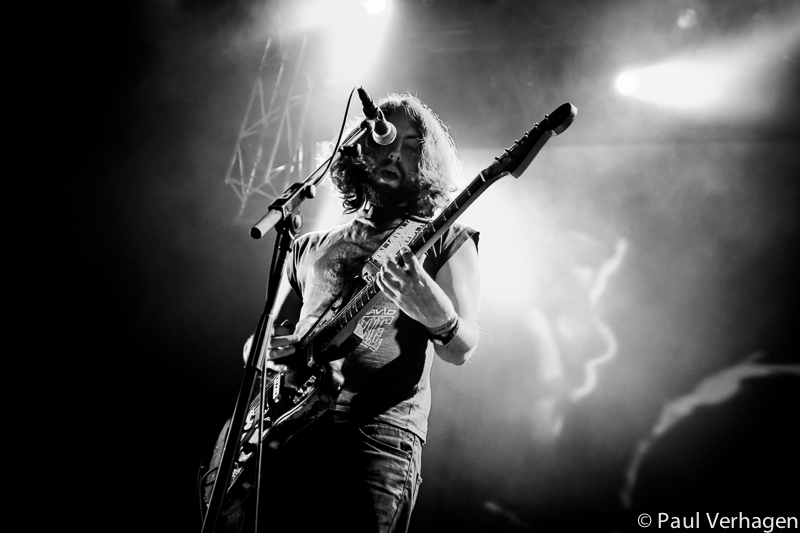 I was fortunate enough to check out Uncle Acid & The Deadbeats for the first time on the morning of the second day of the festival after reading about them in the program. They were strangely absent in my playlist before, I guess because of their unappealing name. (Yeah I'm shallow like that). Good thing I did, because else I would have missed what to me was probably the best show that day. Uncle Acid's plodding Beatle-doom (as I Christened it) turned out to be a real attraction as 013's Main Stage was pretty much as packed as when the 'big guns' like High On Fire & Electric Wizard were playing and turned out to be a real treat. I was only familiar with their most recent record 'Mind Control' (something which I changed the last couple of days) but songs from both albums were played in a loose but tight way with a kind of nonchalance which suited the music really well. The sound was great and really compact which made the impact of their simple but oh so catchy riffing even bigger. Biggest letdown was I had to leave about 3/4 in to catch my next show, but alas, that's kind of a tradition on Roadburn; the gut wrenching choices on what to see and not. (LV) 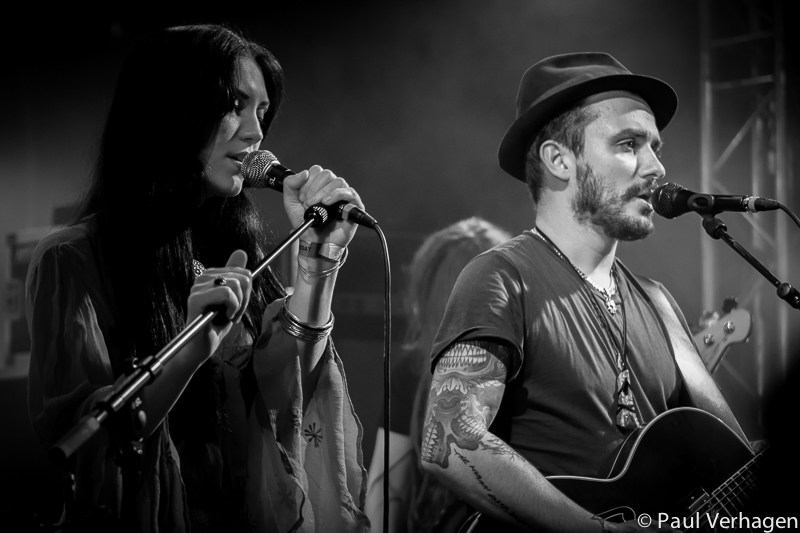 Hexvessel was a band I missed last year for whatever reason but after hearing their most recent output 'No Holier Temple' that was certainly not going to happen again. The sound volume was suitably 'quiet' at Het Patronaat, kind of forcing people to really listen to what the band was doing but also letting all the subtleties of the music kindly breathe through the marvelous acoustic space that is Het Patronaat. While it wasn't as busy as with other shows, (which was kind of nice for change) the people present (including me) seemed to thoroughly enjoy the calm, occult interlude to all the heavy riffing of that weekend presented to them by Kvohst and company. As a side note: It still kind of amazes me that he (Kvohst, or Mat McMerny) used to front acts like Dodheimsgard and <CODE>. (LV)
The second round for Neige as the artist in residence was with Les Discrets. This is however not his own band, but a project of Fursy Teyssier, a singer-songwriter, animated film director and album cover artist. With Les Discrets he’s trying to express the concept of his art and Neige, amongst others, joined him as a session musician. In contrary to Lantlôs this project brings you more shoegaze and less black metal. After getting something to eat in the city this was the perfect band for my late afternoon stupor. A bit drowsy they took me away and I liked it. Too bad some chatting people occasionally brought me back down to earth, but furthermore it was a nice trip through their hypnotic wall of almost poppy melodies. (GG)
Damn, because the Green Room was completely filled with doom maniacs I couldn’t see the first part of Cough. The mind inducing groovy Doom was short for me (only two songs) but their massive sound bites were enough to impress me, the next time put them in The Patronaat or at the Mainstage please. (MvdH)
Electric Wizard started their fuzz and doom with monstrous riffs at the right time. Everyone was clouded in alcohol and/or drugs so the headliner of tonight started the ride for a complete packed audience. More than eighty minutes they played all their classics with cult movies accompanying the eerie atmosphere. Fierce and relaxed the three men and one woman have all time for their heavy set. Everyone is banging their heads on the stoner grooves so the guys from Birmingham gave what Roadburn asked for so long. (MvdH) 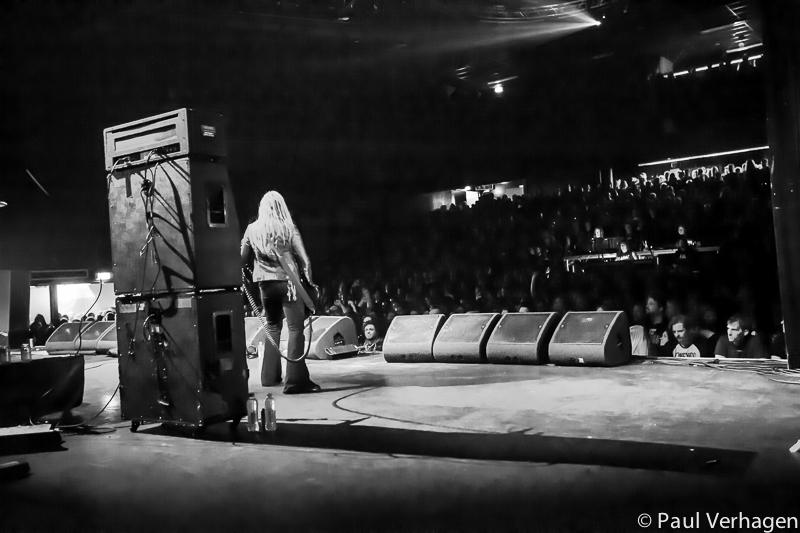 Arriving at not even a half filled Green Room (Electric Wizard was playing and the rest were standing in line for Goat outside), Seremonia didn't really seem to care and stoically performed their punkish occult rock in their native Finnish tongue. While all the members kind of looked like caricatures of several rock-genres (or like they were pulled from different bands without having time to change…) they seemed to enjoy their first stint out of Finland and their rudimentary and even sometimes somewhat sloppy songs got a warm reception from the people present. With set closer Antikristus 666 we got a suitable farewell and that meant for me that my second day was done. (LV)
As a Dutch guy you aren’t going to Roadburn for Amen Ra since you saw them plenty of times. With the knowledge the sound in the Patronaat was almost every time perfect the last two days I was begging for the final sledgehammer blow of the night. The torturous and painful screams of Colin H. Van Eeckhout where echoing in the formal church. For this moment it was the church of Ra and no one could stop them in their march of doom. Repeating riffs and thundering drums brought everyone into estate and everyone was talking about the superb gig afterwards. There was something in the air tonight, I even can’t tell but every aspect was in great balance. Old songs were mixed with new ones (Nowena for example fits perfect in the doomy set) and everyone bowed down for the brothers of Ra. After the set a girl left the building upset and crying and the monstrous tones were still battering in my head hours afterwards! (MvdH)

Click here fot the review of Roadburn 2013, The Afterburner!