Ruins - Place of no Pity
Place of No Pity marks the fourth release from Tasmanian (Australia) black metallers Ruins and the first of which, to feature all four members of the current ‘live’ touring unit. Ruins have always sat somewhat on the less technical side of the fence, with perhaps the exception of Dave Hayley’s sublimely executed drumming, which is once again a highlight on Place of No Pity. In saying that Ruins sit on the less technical side of the fence is by no means an insult, as their ‘simplistic’ approach to song writing has always suited their primarily riff based sound. Place of no Pity however sees the band starting to abandon the riff based onslaught of previous albums in favour of a much more moodier, ambient and darker affair.

“Inhabit the Twilight” begins the album in no nonsense fashion, delivering blast beats, furious double kick drumming and rabid aggression, immediately catching the attention of the listener. The second track “A Lesson in Ruthlessness” on the other hand is a complete change of pace, bringing along with it the groove, and exhibits a very Satyricon- Now Diabolical vibe.

The 8 minute plus “Death Lends the Ultimate Touch” provides yet another change of pace, as it aims for a droning/atmospheric, black metal vibe. Unfortunately while it does exhibit much in the way of ambition, it falls a bit flat in offering much in the way of flavour and becomes easily forgettable. The title track “Place of No Pity”, clocking in at over 9 minutes is a stark contrast to this track however and is easily one of the strongest on the album, showcasing what the band does best; razor sharp riffing combined with dynamic and aggressive black metal. The faster side of Ruins is shown on the tracks “Winter’s Will” and “Oath”, but give way to much more brooding atmospheric overtones that simmer throughout the album.

The album was once again recorded and produced by long time live guitarist Joe Hayley, who has done a great job with producing a powerful and dynamic record. Some black metal purists may be put off with the clean sound of the album, especially in the drum department, that being said, Ruins it would seem have never been a band to care too much about the purism and outright silliness, which comes along within the genre at times though.

In the terms of the Ruins back catalogue, overall Place of no Pity stands tall, and while it may not quite reach the peak of their superb previous album Front the Final Foes, it does show a band with an abundance of talent in a period of transition in terms of their sound. Bar a few minor low points it is certainly also an album for the band to be proud of and it will be exciting to see where the band heads next from here. 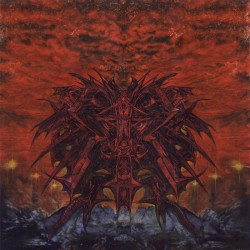