Chvad SB - Cricket Where the Compass
Never judge a book by its cover. Never judge a band by its name and never judge music by the album title. On Chvad SB’s Crickets Were the Compass there is a dog drawn in front of a grey area with rubbish on the streets and some old houses. It could’ve been a cover for a children’s book. I guessed this band would be some East-European copycat Metalcore/Post Hardcore band. I was totally wrong. Chvad SB is intriguing (Dark) Ambient/Drone with a story; an instrumental story of 55 minutes.

In six songs Chvad SB sets a moody tone full of eerie vibes that mostly are haunting and sometimes melodic. The soundscapes tell a story. Mostly a subtle buzzing noise sets the tone while later horror movie sounds are crippling through the stereo. In ‘The Dust Cloud Permeates’ the monotonous picking on guitar strings give a feeling of bad things to come. This title is well chosen.
In the stream of Drone and Ambient layers in ‘People Keep Asking and I Say You’re Well’ a subtle guitar melody is repeated. The textures are slowly moving to other territories making this album a discovery. No wonder Chvad SB is making experimental music since the early nineties. This album is his first properly released album under his own name and where he creates all the music.
Abstract music forms the base and evolves into a monster you cannot hide for. The last song ‘Crickets Were the Compass and The World Goes ‘Round’ is again buzzing noise, now with a subtle sound similar to a Geiger teller while dark synths are coming in. More than ten minutes a musical shadow is forming in the darkness of night.
There are tons of artists in this musical area, Chvad SB is one of a kind and simply can hold you in a stranglehold as Lustmord does during the complete album. A heartbeat in the end tells me I am still alive. 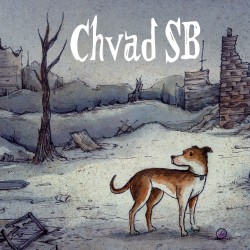 Tags: #chvad sb #silber records #ambient #drone #crickets were the compass
Tracklisting 1. It Haunts Her
2. A Hair Before Sundown
3. The Dust Cloud Permeates
4. People Keep Asking and I Say You're Well
5. There Isn't a Day That Goes By
6. Crickets Were The Compass and the World Goes 'Round
Line up Chvad SB - All instruments
Related Content