American Heritage - Prolapse
Sometimes you are surprised a band still exists. In the early years of Mastodon American Heritage shared a picture disc 7 inch EP with them. Everyone knows what happened with Mastodon; American Heritage always stayed a small underground band. Operating from 1996 the band always showed a mixture of Noiserock, Sludgemetal and Hardcore with a groove.  ‘Prolapse’ will be their swansong because after the recordings core member Adam Norden left the band.

Everyone who is familiar with the album ‘Remission’ and the releases before will have a good time with the six new songs on ‘Prolapse’. Hearing “Anxious Bedwetter” or “Blackbird” gives a perfect view how great the begin times were when bands like Mastodon, Baroness and Black Cobra started their career. The members of American Heritage were always highly admired in the scene; they never made a breakthrough.
Judging on ‘Prolapse’ on one hand the songs sound badass, grooving and have that cynical undertone in the vocals. While they rock you also hear the hazy atmosphere in the songs. This band always seemed to stay the support act no matter how hard they have worked through their career. It might be song writing skills maybe; the tunes are catchy but never will stick in your head forever. If we’ve treasured a forgotten rehearsal session with unreleased tracks from Mastodon’s early days.
The album ends with three cover songs. Didn’t they have more inspiration left for new work? The Descendents and Black Flag covers are mashed up in the raging bull style American Heritage is playing on the rest of the album. In the Girls against Boys cover song “Bulletproof Cupid” the boys are showing their subtle side. The brutal sound is transferred into a warm guitar sound with ditto singing. The harmonics are great too and actually this is the best song of the record.
The band’s sick humor is also displayed in the disgusting cover artwork. Look to the album cover and google ‘Prolapse’ and you get the point. Sick and twisted; just as the music is. 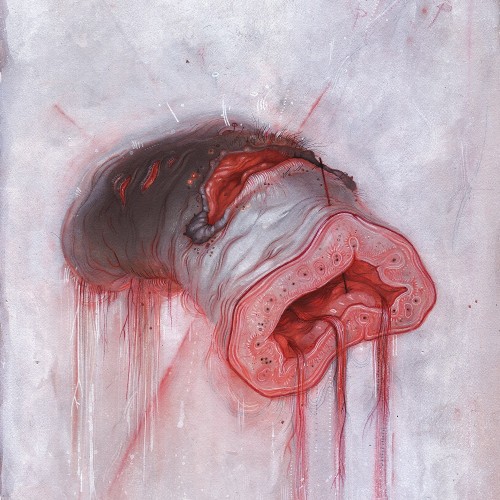