Electro Quaterstaff - Aykroyd
Being in an instrumental band can be almost a double edged sword at times, on one hand it is extremely liberating and can mean that a song may be written without the consideration of the common verse/chorus restraints and also elevates a lot of the ‘I dig the music, but the vocals ruined it for me’ thoughts that are quite common among many music enthusiasts. At the same time, it can be quite a challenge for an instrumental band to create music that holds people’s attention for a large amount of time, especially over the course of an entire album. Canadian based band Electro Quarterstaff certainly do have the chops and musical ability, to command such attention. At the same time simply having musical ability is not always a recipe for success.

Aykroyd begins with the fairly innocuous, slow burning guitar and bass jam ‘The Wolf Shall Inherit the Earth’, following on, ‘Mcnutty’ (an obvious song title reference to one of the main characters of US crime drama ‘The Wire’) on the other hand showcases a complete different side to the band as opposed to the opener as it bursts out of the gates armed with frenzied guitars, manic drums and varied time signatures all nailed with a high level of precision and fury. Many of the tracks that follow, such as ‘Waltz of the Swedish Meatballs' and ‘Descent by Annihilation Operator’ also continue along this path set out.

Stylistically Electro Quarterstaff can be best described as a mash up between Mastodon and Rolo Tomassi, as they have a very similar style to both of these bands, just without the vocal component. The band also seems to have quite a sense of humour, having named themselves after a weapon used in a Canadian cartoon called Rocket Robin Hood and is also illustrated by many of the names they have chosen to call the their individual songs and name their albums and EP’s over the years.

Musically speaking every member of Electro Quarterstaff is on top of their game. The 3 prong guitar attack works great, with each guitarist executing their parts flawlessly and without stepping on each other’s toes, which is a feat within itself. The bass also serves as a solid backbone for all of the tracks and the drums are sublimely executed with enough flavour to keep things interesting throughout. The main gripe to be had to be had with this album is that with the exception of the opening intro track, all of the songs seem to bleed in to each other and despite the quality musicianship; it’s hard to discern one track from another at times during the album. There is also a noticeable lack of dynamics as a vast majority of the tracks seem to fly on past without necessarily taking the listener on the journey with them. The songs have all been well thought out, but if the band were to tone down a little, focus harder on dynamics and taking the listener along with them on the journey, rather than ploughing on through to their destination, this coupled with their musical skills, would sure to make the band a forced to be reckoned with in the instrumental scene for many years to come. 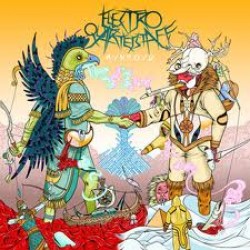