Deftones / Three Trapped Tigers - Deftones is playing an exclusive clubshow in 013
Deftones from California is doing a festival run in Europe and also has the time to do a few club shows. In a packed 013 the temperature easily rose to temperatures normal in California these days of the year. The former nu-metal band (this genre is already dead for a long time) showed with the latest albums Diamond Eyes and Koi No Yokan they are still alive and kicking.

Opening act of the night is called Three Trapped Tigers, to be honest I did not check what this act was all about. Nonetheless they did leave a positive impression. Three Trapped Tigers is a three-piece act with a drummer, synths and a guitar. They create a modern psychedelic post-rock sound, which is hard to link to other bands. If you have to maybe Maserati or And So I Watch You From Afar.
The best part about tonight’s show was they way they managed to start in a mellow way and built up to an energetic show. By doing this, the reaction of the audience was also progressing during the show, which resulted in a quite focussed audience. It almost worked like being hypnotized, fun times and a band worth checking out. Their latest effort is called Numbers: 1-13 and is worth listening to. 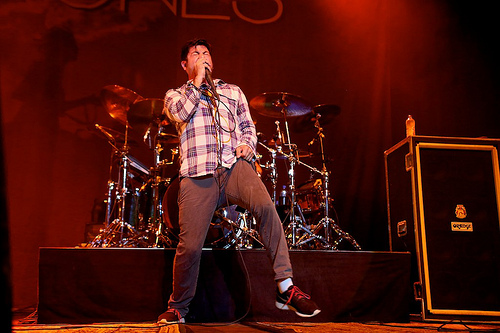 When Chino Moreno and his brothers are entering the stage with a smile you know there are good times coming up with the grooving alternative metal of the Deftones. The band is energetic and grooving from the first song ‘Rocket Skates’, especially drummer Abe Cunningham shows his talents. On the guitar is Stef Carpenter who is only looking at his guitar pedal and he bangs his head as a true metalhead. In the meantime he gives us the most grooving and chilling guitar riffs metal is known for. Chino Moreno still has the child in himself when he goes loose on stage. As with his side project Palms he opts for the jam session way to do vocals. That means his vocal lines are a bit different as on the records. No problem, because he is swinging through the set vocally as well moving.
With a mixture of old (‘Passenger‘ or ‘Change (in the house of flies)’) and new work (Diamond Eyes or ‘Rosemary’) basically every good song from every record is covered and time is flying by. Four things make this show outstanding; 1) the quality of the songs, 2) The variety in the song material, 3) The tightness of the band and 4) The extra layer in the back courtesy of sampler/keyboarder Frank Delgado. With this base it’s easy for front man Chino Moreno to express his lyrics (screaming or singing) in a natural way. He also takes the time to make contact with the fans. As said before this guy wants have a good time with the fans and nowhere has he felt he’s better as his crowd.
As encore they play ‘7 Words’. The venue explodes and everyone feels its 1995 again. After such a lot of years Deftones proved they are still on the rise with a mixture of new and old songs. How many bands still can say that?
Details Written on Thursday Sep 5th, 2013
Writer @Maurosis